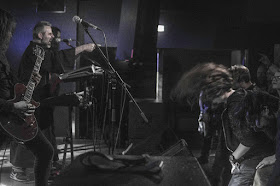 1.Can you give us an update on what has been going on with the band since the recording of the new album?
We have been very busy with preparing the new release and promoting it, as we are self-releasing the CD version. We have also created a videoclip for the track ‘The Enlightened Ones’ with the help of Italian artist Francesco Gemelli (Mayhem, Katatonia etc). The next step will be to concentrate on rehearsing for a number of upcoming gigs to promote the new album.

2.You have a new album coming out in September, what are some of the things you feel you have done different musically with this recording that you where not able to do with your previous releases?
One of the biggest differences is that we recorded this album ourselves and it was mixed and mastered by our drummer Dan. It was a big risk at first as we have always worked with ‘professional’ studios before, but it totally paid off as the sound is great and it gave us the opportunity to experiment with choral samples, different types of vocal approaches etc. We also took the time to find the right guitar and drum sounds, which I think shows.

3.This is your first album in 7 years, can you tell us a little bit more about what has been going on during that time frame?
Quite a lot to be fair. We played a number of gigs abroad, there were many line-up changes, we made one professional videoclip for ‘Be Here’, we organised a gig in a church in central London etc. And we also re-wrote this album three times, each time with a different line-up, until we came to this final version.

4.Some of the lyrics on the new album have historical themes to them, can you tell us a little bit more about the lyrical topics and subjects you explore with the newer music?
This is a concept album about a professor who uses a sophisticated time machine to travel back in time in order to understand what drives humanity to self-destruct. He takes a glimpse into the future, and before he completely dissolves into the universe, he realises that the shape of history is ultimately a spiral where all things repeat themselves, but always in a slightly different format. Therefore humans don’t recognise the patterns and keep making the same mistakes over and over again.

5.Originally the band was from Belgium, what was the decision behind moving to the United Kingdom?
I met my current wife in London back in 2002, when I came here to ‘try out life abroad’ when my research assistant university contract expired in Belgium. You could say, from that point on I was ‘doomed’ to move to the United Kingdom ;) Ultimately this greatly benefitted the band as well, even though I had to re-start from zero here.

6.What are some of the best shows that the band has played over the years and also how would you describe your stage performance?
The gig I mentioned earlier in the church, was definitely one of the highlights. We played at St-Giles in the fields in London, and our then drummer organised the whole thing, including hiring security to ensure the drunk metalhead behave, haha! We got Skepticism to headline the show and I think we provided an unforgettable experience to the 300 people who turned up.

7.Do you have any touring or show plans once the new album is released?
So far only one gig in Belgium, at the Armistice Doom Fest in November. We will ensure it will be a memorable show, but looking forward to also book other shows elsewhere.

8.The new album is coming out on 'Melancholic Realm Productions', can you tell us a little bit more about this label?
It’s my own label in order to self-release the music. It’s no more than an alias I am using.

9.On a worldwide level how has the reaction been to your music by fans of funeral doom/death metal?
We are a long-established band, going on for 18 years now, and have our own following which makes me proud. Our fans like the fact that our music sounds different than your usual funeral doom. We add a number of elements from various other genres to our music, without ever losing the ‘funeral doom’ focus however. I think people who have followed us throughout the years appreciate our authenticity. The new album is a definite return to our heavier roots, but all the ‘typical’ elements we have added over the years, including some of our progressive tendencies , are still there.

10.What is going on with some of the other bands or musical projects these days that some of the band members are a part of?
Most of us are in a number of other active bands or projects. There are too many to mention, but just to give an idea our drummer Dan also plays in Shape of Despair and Clouds, our guitarist Frank plays in Fen and I play in the atmospheric (funeral) doom band Towards Atlantis Lights. These are all alive and kicking!

11.Can you tell us a little bit more about the artwork that is presented on the new album cover?
The artwork cover symbolises man’s vain search for the eternal and the infinite; concepts the human mind can’t really comprehend.

12.Where do you see the band heading into musically during the future?
We always try something different each time, without ever completely abandoning our funeral doom death sound. So expect a similar approach. One thing is for sure, it won’t take another 7 years for the next album.

13.What are some of the bands or musical styles that have had an influence on your newer music and also what are you listening to nowadays?
We are influenced by a wide range of music and it’s hard to tell exactly which, as this usually happens at a subconscious level. The album has elements of funeral doom, extreme metal, neofolk/neoclassical music, ambient, atmospheric black metal, post rock etc so you can only guess where the influences are from. As for what I am listening to nowadays, here are a few records I keep returning to:
* Crippled Black Phoenix- The Great Escape
* Tchornobog-s/t
* This Empty Flow- Nowafter
* Winterfylleth- The Hallowing of Heirdom
* Sen Svaja- Dowry from a Swamp

14.What are some of your non musical interests?
Life coaching, spending time with my cats, going for walks in nature/towns with the wife, reading, etc

15.Before we wrap up this interview, do you have any final words or thoughts?
Thanks a lot for sending the first interview questions for ‘Seeking Infinity’.
Those interested in our new album, can check our official videoclip here: