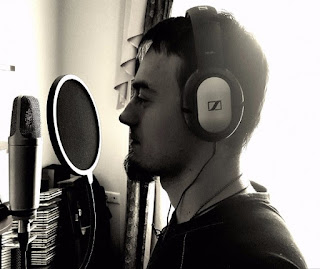 1. For those that have never heard of you before, can you tell us a little bit about the musical project?
1. Sorrowful Land was born in early 2014 as a collaboration act of  Peter Laustsen from Swedish band When Nothing Remains and me. Originally we planned to release a full-length album together but managed to record only one demo/promo song. Peter was too busy with his main band and abandoned Sorrowful Land, so I took control of all things and since then Sorrowful Land is my one-man project.

2. How would you describe the musical sound that is presented on the recordings?
2. I’d say it’s more like a mix of doom-death metal with some gothic aprroach and funeral doom-metal moments that appear here and there. Pretty atmospheric too I guess. And gloomy at times. Overall I tried to create good catchy songs. Did I succeed? Let the listeners decide J

3. What are some of the lyrical topics and subjects that you explore with your music?
3. When it comes to lyrics – first of all I write about my own feelings and life situations I’ve experienced. Also I`m fond of classic English and American poetry and from times to times I use poems as the basis for my lyrics.

4. What is the meaning and inspiration behind the name 'Sorrowful Land'?
4. Oh, it’s the interesting one! When we started in 2014 before even recording a single note me and Peter wanted to come up with a cool-sounding name. And the name came to me while I was sleeping at night. It appeared in my dream actually. Pretty funny, huh? And so when I got up next morning – I already had this name in my mind. It was like “that’s it and I must keep it!”. As for the meaning: it may describe either the whole planet that is full of sorrows or our particular country. You may know that Ukraine is facing hard times now. So for me this name does include several meanings.

5. With this project you record everything by yourself. Are you open to working with other musicians or do you prefer to remain solo?
5. Let’s put it that way: I compose all the stuff and record it myself, that’s truth, but on the debut album I had two session musicians that actually recorded bass and drums parts. They did a great job and helped me a lot and I appreciate it. On the new record that’s called “Where The Sullen Waters Flow” – it’s all done by me. And yes, for the future records I’d love to have some special guests to work with! I even made a list already, but I won’t tell ya who’s in it, haha! J I do hope that this idea will come true.

6. The album was released on 'Solitude Productions, are you happy with the support that they have given you so far?
6. Totally! I’m with Solitude Productions for 5 years now and it goes well enough! They are easy to work with and open-minded guys.
7
. On a worldwide level how has the feedback been to your music by fans of funeral doom and doom/death?
7. Quite well I’d say. The debut album’s average score is 8 of 10 due to the reviews from webzines and magazines throughout the world. I think it’s good enough to get such ratings for the debutee, not to forget that doom-metal (especially funeral doom) is still a very underground genre. As for the fans – some liked it, some didn’t. It’s normal and usual thing for you to read: “AWESOME” today and tomorrow you may see: “AWFUL”.

8. What is going on with your other band 'Edenian' these days?
8. It would be honest to say that Edenian is on hiatus. It’s been three years or even more since our drummer left. And still we can’t find the right person to fill in. Sad but true. All members of Edenian play in new bands now so I dare not to say if we ever will play or record something new under Edenian name again.

9. Where do you see yourself heading into musically during the future?
9. I’m planning to record new Sorrowful Land full-length album. And it’s gonna be heavier than previous. Also I’m not planning to get stuck in doom-metal only and recently I’ve started a new band called Resolution. We play thrash-metal. I can’t foresee what the future holds – time will show.

10. What are some of the bands or musical styles that have had an influence on your music and also what are you listening to nowadays?
10. Oh, tons of them in different genres! I won’t be original to say that my all-time favourite band is Metallica. Among the others (in no particular order) are: Slayer, Death Angel, Iced Earth, Kamelot, Trivium, Amon Amarth, Godsmack, Disturbed, Nickelback, and many others. As for the influences on Sorrowful Land music, it would be: Paradise Lost, Doom:VS, Saturnus, Katatonia, Swallow The Sun.

11. What are some of your non musical interests?
11. History, reading, uniformology and reenacting aka living history events.

12. Before we wrap up this interview, do you have any final words or thoughts?
12. First of all – go listen to the new Sorrowful Land EP “Where The Sullen Waters Flow” which is out on December, 15th and if you like it – support the project and label by buying the music! And of course – STAY DOOMY! \m/
Max Molodtsov
12.12.2017

Posted by OccultBlackMetal at 8:26 PM