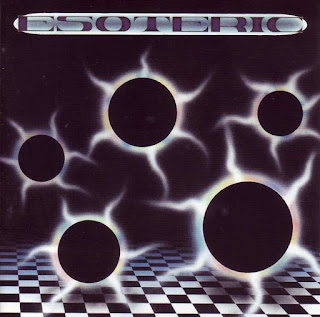 
Clean  playing  starts  off  the  album  along  with  some  atmospheric  sounding  keyboards  which  also  mixes  in  with  the  heavier  sections  of  the  music  while  the  slow  riffing  brings  in  the  heaviness  of  funeral  doom  metal  and  spoken  word  parts  can  also  be  heard  in  the  background  briefly.

On  this  recording  Esoteric  played  a  musical  style  that  was  mostly  rooted  in  funeral  doom/death  metal  while  also  adding  in  psychedelic  and  experimental  elements  which  also  gave  the  songs  more  originality,  the  production  sounds  very  professional  while  the  lyrics  cover  misanthropy,  endless  space,  dreams,  isolation  and  psychedelic  experience  themes.

https://www.facebook.com/esotericukofficial/
Posted by OccultBlackMetal at 6:51 PM