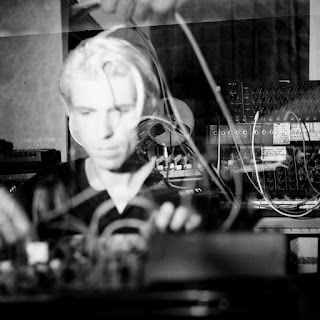 1.For those that have never heard of you before, can you tell us a little bit more about you and your music?

I'm an Italy-based musician experimenting with different languages, especially with with musical language.

2.Recently you have released a solo album, can you tell us a little bit more about the musical style you went for on the recording?

I wanted to create an album of snapshots of my studio sessions. I chose some of the patches I was studying on my synthesizers and wanted to use on stage, and from there I started to develop compositions that I recorded in real time, then going for the version that better matched the style of the others. I sewed them together with field recordings and sonic materials I had collected while recording and scratch music parts made with a Vestax Controller One. I tried to follow a spontaneous flow that would allow me to develop a personal style ‘undermined’ by the Tarot, which allowed me to break the repetitive schemes of the ego. A lot of electronic music has come out over the last few years, but it has rarely satisfied me – I find it’s repeated clichés. With this album I wanted to make something that I would like to listen to.

3.The album title also ends with 'Volume One', is this a start of an album series?

Maybe. If you take a look at my You Tube Channel – MUGA MUCHU MORPHING THEATER –, you’ll find out that there I have some Istantaneas that number even over thirty. That's because I have a lot of works, almost thirty Istantaneas, more than the ones included invol.1, composed in more than two years, which I'm now mixing. I look forward to publishing them all in three albums in the years to come. Publishing times depend on finding interested record labels.

4.All of the music on the new album is instrumental, would you be open to using vocals on future solo releases?

Yes, with the exception of Istantanee vol.1 and Extrema Ratio,  I'm already using vocals in my music, you can hear some of these songs on You Tube or Sound Cloud - Il fiore dai petali d'acciaio (The flower of steel petals) and Appunti da una casa di piacere alla deriva(Notes from a drifting pleasure house) on my You Tube channel, or in Scorrevole (Sliding), which features in Amissa, the last Christmas mixtape by the record label Dio Drone.  My new album, which I'm now recording, will feature vocals - some of them are already part of my live sets.

5.On this album you recorded everything by yourself but also have experience working with other musicians, how would you compare the two?

They are both interesting but on different levels.  In a live solo I can perform with the Buchla Music Easel without worrying about changing the structure of the composition and enter completely free improvisational territories in a transcendental state. I hope I’ll have the chance to work with other musicians in my next albums, to mix my sound with other musical timbers. I already recorded some pieces for my next albums. Now I'm touring with Benedetta Dazzi on the cello and live electronics, she is very into it and knows how to interact with unpredictable electronic synthesizers, and she’s working with me on my new album.

7.What are some of the best shows that you have played so far and also how would you describe your stage performance?

Every venue is different, I really don't know which was the best.  I usually do two different types of shows, one includes a ritual happening performance guided by the Tarot, meant to free the real self of both the performer and the public, and another focused only on the music. With my solo project I enjoyed very much playing at Macao in Milan last year and in Reggio Emilia and Lerici, at a beautiful venue by the sea. Last spring I performed a beautiful experimental show based on the Eleusinian Mysteries together with Daniele Dubbini, Benedetta Dazzi and Angelo Tonelli, who is one of the major scholars and translators from ancient Greek. I hope we’ll have the chance to do it again and record this on album. Also, sharing some of my tour dates and studio time with Todd Barton was a mind-blowing experience.

8.Do you have any touring or show plans for the future?

Yes, my 2020 tour started on January 27th. I’m performing with Benedetta Dazzi on the cello and some shows are going to feature Todd Barton (USA).

9.You have worked with a good amount of labels, which labels do you feel have been the most supportive when it comes to getting your music out there heard?

I'm thankful to all the labels that support my work and invest time and money in something which is not classifiable as a specific genre or trend.

9.On a worldwide level how has the reaction been to your newer music by fans of experimental, avant garde and drone?

10.What is going on with the musical project these days you have with 'Bogazzi'?

I played with Nicola Bogazzi for about five years; we worked a lot together, but we have different projects now. During my live set I still play some rearranged compositions from Extrema Ratio.

11.Where do you see yourself heading into as a musician during the future?

I’m a musician as well as a tarot reader and astrologist, but I'm not a fortune teller, so I don't know where I will be. Now I'm working on the live sets for the Istantanee vol.1 Italian Tour, I’m mixing Istantanee vol.3, and recording the new album.

I have always been open to all musical styles and languages. Maybe, as for electronic music, nowadays I'm most inspired by Todd Barton, and I had the great luck to have him as my Maestro. Now I'm listening to a lot of  Mozart, Chopin and Adriano Celentano stuff.

13.What are some of your non musical interests?

Like I said, I'm into Tarots and astrology. I also love literature and spirituality

Posted by OccultBlackMetal at 2:04 AM