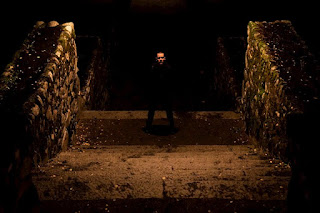 Dunkelheit and I have been working hard to get the new album out on various beautiful editions. The process has taken several years and now we can finally see the final outcome. At the moment we are promoting the album. I am writing new music for the next releases. I have also plans for my other project Sarajah in the near future.

It was 2006 when I started to write songs for the very first demo. The first demo is very raw blackened doom. Back then I wanted to release demos on limited tape editions and I did 3 demos before the first album. The first album Waterways was released 2013. The album is melodic yet still ice cold Funeral Doom. After the first album I did few EP’s that are a bit faster and lighter. Death’s Threshold is a return to heavier and slower songs.

3.This is also your first release since 2015, can you tell us a little bit more about what has been going on during that time frame?

I have been quite busy with new music and we also did a re-release of the 2015 EP’s with Dunkelheit. The new album was written and recorded between 2017 – 2018. Four years between releases seems a bit long for Shades of Deep Water because I have released music almost every year in the past. This time the process took longer because all the music was new and written for this album. The first album was mostly re-recordings of the demo songs and was a bit easier to make.

4.What are some of the lyrical topics and subjects you explore on the new album and also how would you describe your progress as a songwriter over the years?

The subject of the album is Death. The theme is set to the cosmos where the subject is viewed in a quite big scale. The lyrical themes of the band have always been related to Death one way or another. I think my songwriting has evolved over the years. When you have done music for many years you know what will work. The early releases were more experimental.

5.What is the meaning and inspiration behind the name 'Shades Of Deep Water'?

It’s been 15 years so I can’t really remember much details. I remember that I wanted a name that would describe the music I did back then. I think it still works very well for the music. It’s a bit difficult name because of it’s length but originally it was even longer. The first version of the name was Shades of Deep Dark Water.

The idea for the artwork was to create a scenery in the afterlife. In the afterlife the dead are walking down stairs of a temple. The sky is colourful and full of cosmic sights. Including stars, planets and nebulae. The main focus is the dead walking down the stairs. The appearance of the dead is something like lost souls roaming as shadows.

7.With both of your musical projects you record everything by yourself, are you open to working with other musicians or do you prefer to work solo?

I think it’s very possible that there will be other musicians on the next releases. I don’t think there never will be a full band at least in the studio. Live shows are a different thing. I am not too keen on playing live but you never know what the future brings.

8.On a worldwide level how has the reaction been to your newer music by fans of funeral doom metal?

I think it has been very good so far. The first reviews have been positive. We have to wait few months to see the bigger picture. The new album has also got positive feedback from people who don’t usually listen to Funeral Doom. It’s great to see that the album can be enjoyed regardless of the genre definitions.

9.What is going on with 'Sarajah' these days?

I have released one demo with Sarajah. I have plans to record a full length album next. The music will be more traditional doom and heavy metal. The lyrical themes of the band are related to northern mythology. The name Sarajah is a great northern sea in the northern mythology.

10.Where do you see yourself heading into as a musician during the future?

Hopefully I can make strong albums and evolve the sound of Shades of Deep Water. I don’t think there will be big changes to the sound but with every new release there is something new. For me it has always been more important to be great songwriter rather than have great abilities with a certain instrument.

11.What are some of the bands or musical styles that have had an influence on your newer music and also what are you listening to nowadays?

Of course the first Funeral Doom bands from Finland like Thergothon and Skepticism have had a big influence. Lately I think it’s more bands like early Paradise Lost and Amorphis. Nowadays I listen mostly old Heavy Metal.

12.What are some of your non musical interests?

I like to travel and be outdoors. I enjoy great sights all over the world. Some of my latest trips have been to the cost of Norway and the Alps in Austria.

Thank you very much!

Posted by OccultBlackMetal at 2:43 PM