1. Can you give us a brief history of the band?
Yes. Try Redemption formed from two high school bands: Undecided and Kismet. We all went to the same high school so things came together quick and easy when the 5 of us decided to jam. Before we knew it, teeth were lost, hair was falling out, kids had been had, and now we're fat and old!But seriously we've played together since 2000 and retained the same line up throughout. We've played shows from Seattle, to Texas, to Milwaukee, to Pennsylvania and been lucky enough to share the stage with many of our childhood influences: Testament, DRI, Nuclear Blast, Exodus,Deicide, Cephalic Carnage, Jag Panzer, etc..

.2. How would you describe your sound to someone who has never heard you before?
We usually like other people to describe our sound because when we writesongs, we don't typically try to sound like anybody. Our individual tastes in music is pretty wide and we like to think that comes through in our songs.

3. Are there any plans for a tour?
You buying? We get out as much as we can, but sometimes can't afford much past the weekend warrior thing...

4. Have you received any label interest?
Yes, but many of the labels have been small and weren't able to offer more than what we were doing on our own. We've also been pretty scrutinous of contracts we've received and it seems like that has scared a couple labels off...

5. How would you describe your musical progress over the years, I have noticed that your newer stuff is a lot heavier than the cd's you gave meat a couple of shows a few years back?
I think that songwriting-wise, it's much easier to write stuff on the fly as a band now. Before, one or two of us would bring a few riffs or a whole songs to practice, but now we come up with most everything together. Plus we practice with a metronome which makes it much easier to get tight on songs with the quickness.

6. What are some of the best shows the band has played?
The Louder, Harder, Faster festival in Allentown, PA in 2005 was probably the most fun we've had. All the bands were put up in a four star hotel and fed and taken care of real well. The original line up of Testament played that show too so we're grateful to have been a part of it.But sometime the best shows are the local ones where everyone is just in the mood to tear shit up. We've always thought it would be cool to hear the crowd scream lyrics and stuff back at us so when we play at home,and everyone screams, "DIRTY, FILTHY, FUCKING, WHORE!" with Hammer, it's the best shit ever!

8. What role does Anti-Christianity play in the music?
Not so much in the music - meaning it doesn't really influence the riffs and stuff - we kind of have a "live and let live" mentality. But Hammer writes about it when he's in the mood... Lately, his lyrics have been more on the death/gore side...

9. What are some of the band's main influences music wise or non music wise?
Like I said earlier, our musical interests are pretty widespread. From Pantera to 80's hair metal and obscure 80's pop stuff, to 70's rock and funk, to Edward's beats (techno/Industrial). And we all enjoy contemporary metal: Cannibal, Amon Amarth, The Faceless...Non-music wise: Nintendo... sweet Christ Nintendo! Good beer (everyoneloves a Hefe!) LOTRO, South Park, Tim and Eric Awesome Show Great Job...it's an awesome show... they do a great job... SpongeBob, CartoonNetwork, Harry Potter, Delorians, D&D, Bob and Tom, the good ol' collegetry, too much to list here..

10. What are you listening to nowadays and what good bands would you recommend?
Daigle has been listening to the hell out of the last Faceless CD. James- Sonata Artica. John - Informatik.We would recommend Scalafrea, Kastigation, and Khrinj.

11. What are some good books or films that you would recommend?
Harry Potter series (books and movies), Lord of the Rings (the movies),Cannibal, Orgazmo, Baseketball, South Park the movie, Team America,Beetlejuice, Edward Scissorhands, Willy Wonka and the Chocolate Factory(movie), Back to the Future series, The Matrix, The original Exorcist(book and movie).

13. Any final words?
Choerl! Pro. Thanks for the interview... and go to YourAssCast.com

Posted by OccultBlackMetal at 12:14 AM No comments: 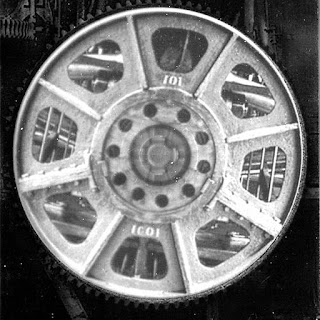 Stahlwerk 9 are a band from Germany that plays an old school style of Industrial/Power Electronics and this is a review of their 2009 album "RetroMekanik" which was released by Steinklang.

Noise effects are very harsh and brutal with a good touch of avant garde, while as the samples sound very tragic, as for the vocals they are mostly spoken word with an evil sound to it.

Lyrics are mostly written about World War II, while the production has a very dark and raw feel to it, as for the synths when they are used they have a very primal dark ambient edge to it.

In my opinion Stahlwerk 9 are a very good Industrial/Power Electronics band that should appeal to all fans of this genre. RECOMMENDED TRACKS INCLUDE "Warsaw Calling/Als Ich Starb" "Katharsis" Overture To A War" and "Vengeance". RECOMMENDED BUY. 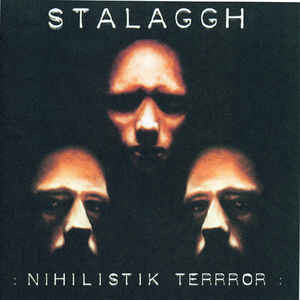 Stalaggh are a band from the Netherlands that pays a very violent form of harsh power electronic noise with a black metal edge and this is a review of their 2006 album "Nihilistik Terror" which was released by Autopsy Kitchen Records.

The music on this album is all harsh noise effects that are very heavy with a lot of distortion and reverb, while the vocals are all high pitched tortured screams that remind me of Abruptum without any guitars or drums.

In my opinion i think Stalaggh are a  very good band and while the music is not very diverse it still gets the point across, if you are a fan of evil sounding harsh noise you should check this band out. RECOMMENDED BUY.

https://www.discogs.com/artist/221698-Stalaggh
Posted by OccultBlackMetal at 2:21 PM No comments:

1. Can you tell us little bit about the band for those that have never heard of you before?
Akash - Old school death metal. Trying to bring that old school twisted sound of death as best as possible.
Joe – Just a some guy’s with a honest love for the beginning days of death metal.

2. How would you describe your musical sound and how it differs from previous releases?
Akash - Personally, I think our sound has become more refined, both in structure and tightness and overall the riffs are just better.
Joe - We're a pretty death-y doom-y band. Old school death metal-esque of course. From our old releases, oh man, have we changed haha. Compared to, our now hidden 2009 demo, let's just say we can play our instruments a bit better.

3. What are some of the lyrical topics and subjects the band explores with the music?
Akash - mostly death and religion. the usual, nothing special
Joe – Akash has that department handled

4. What is the meaning and inspiration behind the band's name?
Joe - Just something cool sounding, no epic meaning behind it.
Akash - Sounds badass i guess, to me at least

5. What are some of the best shows that the band has played so far and how would you describe your stage performance?
Akash - The backstage in edison. We were tight, sounded good and just brought a lot of energy.
Joe – Yup that was our most recent show with Gorematory and Mortum. We had been away for sometime after the first release of Suffering of the Holy and the demo had built up a small amount of rotation and when we came to play some new stuff it was just great. Shows before that were really lame. Theres no real old school death metal following in Jersey. I mean, sure you have the guys that listen to Obituary and Morbid Angel and whatnot, but theres a lot of black metal and thrash, more than a old school death following. A lot of casual old school death metallers in jersey, which left us with a few bleak and boring shows.

6. Do you have any plans in the future to do a tour or festival?
Joe- I dont know about that, I think we need more shows under our belt before we do a tour, nevermind a festival.
Akash - hopefully, if all goes well

7. On a worldwide level how has your music been received by death and underground metal fans?
Akash - Pretty well, I’m always happy when people like our music especially people around the world. It’s been described as old school by many and I’m glad to take part in that kind of sound.
Joe - Lots of people downloaded it, lots of positive feedback, lots of people from the 90's giving it some thumbs up. Not too shabby

8. Are there any side projects besides this band or is this a full time line up?
Joe - Well Dave Hewson and Ryan Donato have a band thrash band together called Condition Critical, and they currently released a demo and are doing some shows. Ryan is also in a band called Strychnia. But as for me, nothing.
Akash - no side projects for me

9. What direction do you see the music heading into on future releases?
Akash -I dont see any big genre changes happening any time soon, but who knows?
Joe - We're gonna stay true to our death metal roots. Not gonna go tech-y or anything. If it gets stale, then it gets stale, but we're gonna stick to our guns until then.

10. What are some bands or musical styles that have influenced your music and also what are you listening to nowadays?
Akash - morbid angel, death, obituary, pestilence and a lot of swedish/finnish death metal
Joe – Cancer, Disincarnate, Morta Skuld, Convulse

11. Does Occultism play a role in the music?
Joe - I mean....no haha, but if it makes a good song. We really dont take cult stuff seriously. It's pretty dumb in the year 2011 if your walking around making an effort to say "well, thank SATAN" just to stick it to the man.
Akash - no, I like to keep music about the music.

12. Outside of music what are some of your interests?
Akash - that's the only productive thing really
Joe - We’re just some bro's. We drink, party, and do some typical 20 year old stuff.

13. Any final words or thoughts before we wrap up this interview?
Thanks for the interview, thanks to FDA REKOTZ for signing us, thanks to our fans and friends for the support and good times. Listen to old school death metal!

https://www.metal-archives.com/bands/Hatred_Embraced/3540262218
Posted by OccultBlackMetal at 11:23 AM No comments: 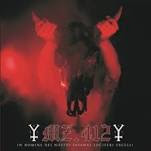 MZ412 are a black industrial band from Sweden and this is a review of their 1995 album "In Nomine Dei Nostri Satanas Luciferi Excelsi" which was released by Cold Meat Industry Records.

Noises are very dark and ambient as well as dark industrial with a lot of distortion that is very ritualistic, while the bass gives the music a heavy edge, as for the vocals they are spoken word passages mixed with some black metal screams about Satanism, and Occultism and at times there are some drum beats that have a shamanistic feel to them.


Lyrics on this recording cover an Anton LeVay approach to Satanism with some Necronomicon/Sumerian themes as well as sadism while the production has a very raw and chaotic sound.

https://mz412.bandcamp.com/
Posted by OccultBlackMetal at 6:59 AM No comments: