1. Can you give us an update on what is going on with the band these days?
Mirthless is composing new songs into suicidal path.


2. How would you describe the musical sound of the new album and how it differs from previous releases?
A Dirge For Your Suicide is the best analog sound on recording in the same professional studio. Our past releases was rough sound however, the mysticism is always the same way.


3. What are some of the lyrical topics and subjects the new release explores?
The main lyrical themes were personal spirituality, mysticism, suicide and depression. Our formula is desolation into doom voyage. Maniacs can listen our album debut into bleak way…


4. What is the meaning and inspiration behind the band’s name?
Mirthless is a journey into the human subconscious with intense emotions.


5. Has the band done any live shows or is this strictly a studio band?
Not live concerts but, Mirthless will play in live to spread rough emotions.


6. On a worldwide level how has the feedback been to your music by fans of doom metal?
Mirthless were spread into underworld since demo debut by my label Doommaniac Productions. However some maniacs into doom metal are real extreme. Quality, not Quantity!!!


7. Are there any other musical projects going on these days?
I am only dedicated to Mirthless but, our guitarist has his project called Hell Torment.


8. What direction do you see your music heading into on future releases?
Our path is bleak into obscure aura!!!


9. What are some bands or musical styles that have influenced your music and also what are you listening to nowadays?
Our influences are human emotions through music. I admire old classic doom bands and new comrades in the vein of Mournful Congregation, Worship, Ataraxie, Esoteric and more…


10. How would you describe your views on Occultism?
I am not into occultism but, I respect some point of view into rituals, astrology and secrets of nature.

11. Outside of music what are some of your interests?
I am totally dedicated to spiritual knowledge, poetry and secrets of our Mother Nature…


12. Any final words or thoughts before we wrap up this interview?
Succumb yourself into doom voyage…

Posted by OccultBlackMetal at 5:30 PM No comments:

In  my  opinion  Dark  Occvlt  Ritual  are  a  very  great  sounding  ritualistic,  experimental,  occult  dark  ambient  project  and  if  you  are  a  fan  of  this  musical  genre,  you  should  check  out  this  recording.  RECOMMENDED  TRACKS  INCLUDE  "I"  and  "III".  RECOMMENDED  BUY.
Posted by OccultBlackMetal at 9:01 PM No comments: 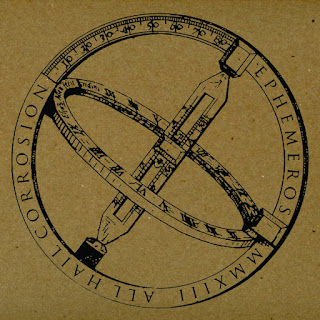 Rhythm  guitars  range  from  slow  to  mid  paced  funeral  doom  metal  riffs  that  are  very  heavy  and  dark  sounding  along  with  some  melody  and  atmospheric  clean  playing  being  thrown  into  the  riffing  at  times,  while  the  lead  guitars  when  they  are  utilized  are  very  dark  and  melodic  sounding  doom  metal  guitar  solos  and  leads.

https://www.facebook.com/Ephemeros
Posted by OccultBlackMetal at 6:30 PM No comments:

Programming  and  fx's  bring  in  elements  of  experimental,  industrial,  and  avant  garde  to  the   music,  while  the  acoustic  guitars  use  finger  picking  and  full  chords  to  add psychedelic  and  folk  elements  to  the  recording  while  still  being  very  experimental,  along  with  some  electric  guitars  being  used  at  times  which  brings  in  the  metal  elements  along  with  some  solo's.