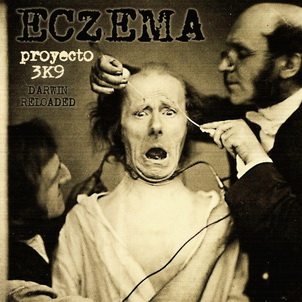 Eczema  plays  a  musical  style  that  is  mostly  rooted  in  death  metal  while  also  mixing  in  some  doom  and  black  metal  elements  as  well  as  also  being  very  experimental,  progressive  and  avant  garde  at  the  same  time,  the production  sounds  very  professional  while  the  lyrics  are  a  concept  album  and  cover  evolution  human  experimentation  themes.

Posted by OccultBlackMetal at 8:47 PM No comments: 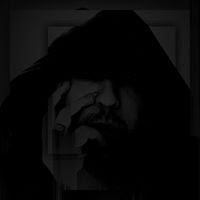 1.Can you give us an update on what has been going on with the musical project since the recording and release of the new album?
Let's call it standard stage of tricking as many unfortunate souls as possible into listening, or (gasp) buying the album. Also, working on Luciferian, kind of opened my third eye towards many different roads, where I can take Tamerlan from now on...so this is a good time to play cartographer.

2.Recently you have released a new album, how would you describe the sound that is presented on the recording and also how does it differ from the stuff you have released in the past?
Think of it like this: Most of the older material was something of a view from above to what is happening below. This one changes such perspective, and places the point of view down, to the point where it's buried with all those things you thought were far enough to present any serious threat. So, instead of the view, we have a struggle for survival and existence, with "up", being the only goal. That's the differing point here.

3.You label your music as 'death folk', can you tell us a little bit more about this term?
This is the term I started using with creation of Luciferian, and represents the area I want to explore further with future endeavors. Pretty much, it presents using already existing formula of neofolk/dark folk music as a tool, to connect with more extreme and macabre styles in both musical and lyrical sense. I want to see to which extremes I can take the said formula, without breaking its back.

4.Your lyrics cover some Luciferian and Occult topics, can you tell us a little bit more about your interest in these subjects?
These subjects have been a part of me, throughout the majority of my life. I feel that the connection to the divine wisdom bringing energy embodied in the entity named Lucifer, is the main source of my inner strength, which helps me overcome the challenges this world puts in front of me, and walk forward with my head up high.

5.What is the meaning and inspiration behind the name 'Tamerlan'?
My birth name, Timur, was given to me after the 14th century Central Asian conqueror Timur Lenk, or as he was known in Europe: Tamerlan. There was no other name I saw as fitting as this one, when I started with the musical project this personal.

6.On the new album you had a few quests can you tell us who they are and also their contributions to the recording?
Let's mention them in the order of appearance, shall we? First we have Bornyhake (Borgne) on drums. Wanted to work with him for a long time, to be honest, and what he did was nothing short of awesome. Then, we have mr Will Connor (Seesar) on percussions. If anyone in this world can awaken Cthulhu with nothing but a set of percussions, he is the guy. Also, there is one more drummer, Aleksandar Maksimovic, who is the drummer of the doom metal band The Father Of Serpents, where I do vocals. He is easily one of the best and most precise drummers I ever had the chance to work with. Let's see who else is there... Ah yes, Cecilia Bjargo (Sophia, Der Blaue Reiter), taking over the alto vocal duties. I already had the honors of working with her on the previous Tamerlan album (AIN), and I can assure you, we will work again. Her vocals take my mind to the most surreal places. Last, but definitely not least, we have my friend Khargash (Khargash, Obscured), on violin. Amazing musician all around, and a damn fine Mortal Kombat 2 player. Also, honorable mention (since he's not really a guest) goes to miKKa, the producer of this album. He's the one, who helped Tamerlan achieve the sound it always needed.

7.Over the years you have lived in many different countries, does this also have a huge influence on your music?
Of course. Just as everything I go through in my life.

8.What are some of the best shows that you have played over the years and also how would you describe your stage performance?
It's hard to name some of the shows "best", since, while Tamerlan doesn't perform very often, I try to make every show special in one way or another. The stage performances vary, depending on the environment, and the musicians, who are available to help me incarnate the music on stage. So the atmosphere goes from the more energetic, almost shamanic performances, to the ones where both we and the audience connect in the act of meditation.

9.Do you have any touring or show plans for the new album?
I'd really love that. I'd love to present Tamerlan live around the world. However, getting a performance in different countries is quite difficult, with all the expenses involved. Nevertheless, I am open for all the possibilities, and will try my best to get more opportunities to perform, now that the new album is out. So, we'll just have to see what happens.

10.Where do you see yourself heading into as a musician in the future?
In today's world where cheap entertainment, artificial personalities and corporate mentality dictates what "art" should be, while the civilization, after all these centuries, still lives by the code of "bread and circuses"? I see myself heading straight into the ground, my friend. But damn it, if I'm going there, I'm going there kicking, biting, and creating as much music as I can.

11.What are some of the bands or musical styles that have had an influence on your music and also what are you listening to nowadays?
Too many to name, to be honest. I really have a vast interest in music, which goes from the most gentle ethereal ambient tunes, to the most extreme styles of metal, so my playlist is never the same. Obviously, all of that influences my work in one way or another, whether I want it or not. But with so many things I'm listening to, it's hard to point out what exactly influences me, and in what way.

12.What are some of your non musical interests?
I like all those topics, that make average minds uncomfortable, and take the minds out of their comfort zones. Be it within cinema, literature, or whatever. Let's call it the limitless and tabooless ways of creativity in any area.

13.Before we wrap up this interview, do you have any final words or thoughts?
It's 10 PM right now, and I'm sitting here, in the half lit room, thinking about the next season of Twin Peaks. Looks promising, doesn't it?
Anyway, I appreciate your support. Thank you for an opportunity to present my work through your zine.

https://sombresoniks.com/tamerlan
Posted by OccultBlackMetal at 1:53 PM No comments: 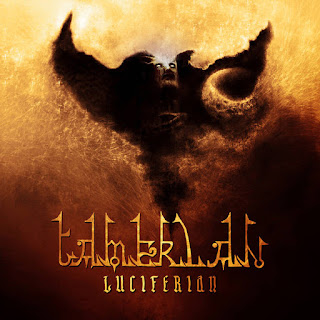 Ambient  style  synths  can  be  heard  at  times  along  with  some  psychedelic  elements  and  the  songs  also  bring  in  a  great  amount  of  neo-folk  and  neo-classical  influences  and  there  is  a  great  amount  of  diversity  present  throughout  the  recording  and  the  vocals  also  get  demonic  at  times  and  as  the  album  progresses  more  traces of  occult  rock  are  added  onto  the  recording  and  when  spoken  word  parts  are  utilized  they  bring  in  even  more  of  a  ritualistic  atmosphere  and  electric  guitars  are  also  used  on  some  of  the  tracks  and  there  is  also  a  brief  use  of  black  metal  screams  and  one  song  also  introduces  stringed  instruments  onto  the  recording.

Tamerlan  plays  a  musical  style  that  takes  neo-classical,  dark  folk, psychedelic,  industrial,  goth,  darkwave,  and  black  metal  and  mixes  them  together  to  create  a  sound  of  his  own,  the  production  sounds very  professional  while  the  lyrics  cover  darkness,  Occultism  and  Luciferian  themes.


Posted by OccultBlackMetal at 10:37 PM No comments: 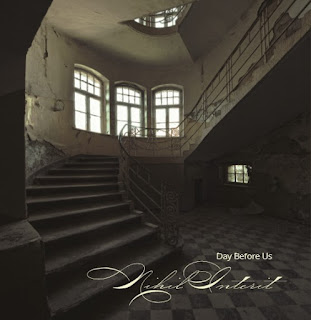 Field  recordings  and  soundscapes  start  off  the  album  along  with  some  voices,  distorted  drones  and  atmospheric  synths  which  also  gives  the  music  more  of  a  dark  ambient  feeling  a  few  seconds  later  and  spoken  word  parts  can  also  be  heard  at  times  and  the  music  also  has  a  soundtrack  film  atmosphere  at  times.

On  later  tracks  the  music  starts  incorporating  more  neo-classical  elements  and  some  of  the  songs  are  long  and  epic  in  length  and  as  the  album  progresses  ethereal  female  are  added  onto  the recording  along  with  a  small  amount  of  whispers  and  electric  guitars  and  most  of  the  songs  also  sound  very  different  from  each  other and  a  later  track also  introduce acoustic  guitars  onto  th album  briefly  and  nature  sounds  are  used  on  the  closing  track.

Day Before  Us  creates  another  recording  that  remains  true  to  the  neo-classical,  ethereal,  darkwave  and  ambient  mixture  of  previous  releases,  the  production  sounds  very  professional  while  the  lyrics  are  written  in  a  mixture  of  French  and  English  and  cover  dark and  esoteric  themes.

https://www.facebook.com/Daybeforeus/
Posted by OccultBlackMetal at 4:31 PM No comments:

The Flight Of Sleipnir/Skadi/Eisenwald/2017 CD Review 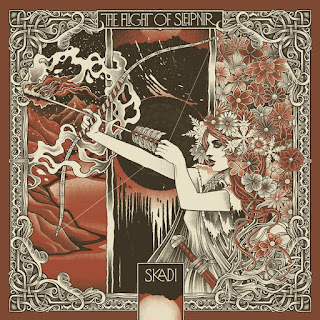 The  Flight Of  Sleipnir  plays  a  musical  style  that  takes  stoner  and  doom  metal  and  mixes  it  in  with  touches  of  folk  and  black  metal  to  create  a  sound  of  their  own,  the  production  sounds  very  professional  while  the  lyrics  cover  Norse  Mythology  themes.

Posted by OccultBlackMetal at 8:03 PM No comments: 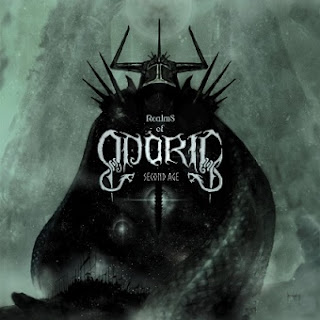 Realms  Of  Odoric plays  a  musical  style  that  takes  classical,  dungeon  synth  and  soundtrack  music  and  mixes  them  together  to  create  a  sound  of  their  own,  the  production  sounds  very  professional  while  the  theme  of  the  album  focuses  on  a  huge  fantasy  world.

Posted by OccultBlackMetal at 4:07 PM No comments: 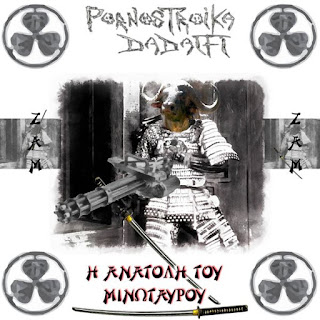 Greece's  Pornostrokia Dadaifi  have  returned  with  a  new  recording that  continues  the   metal,  hardcore,  industrial  and  cyber punk  style  of  previous  releases  and  this  is  a  review  of their  self  released 2016  album  "H  ANATOAH  TOY  MINOYAYPOY".

Pornostrokia Dadaifi  creates  another  recording  that  remains  true  to  the  metal,  hardcore,  industrial  and cyber  punk  mixtures  of  their  previous  releases,  the  production  sounds  very  dark  while  the  lyrics  cover  Dadaism  and  political  themes.

Posted by OccultBlackMetal at 6:29 PM No comments: 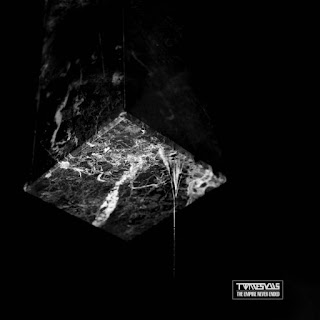 https://youtu.be/dmAy8kYEQEU
Posted by OccultBlackMetal at 1:16 PM No comments: 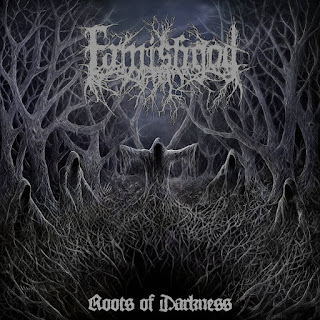 FamishGod  plays  a  style  of  funeral  doom/death  metal  that  is  very heavily  rooted  in  the  90's,  the production  sounds  very  professional  while  the  lyrics  cover  doom,  desolation,  death  and  oblivion  themes.

https://youtu.be/DYBMkPs7wRA
Posted by OccultBlackMetal at 8:13 PM No comments: 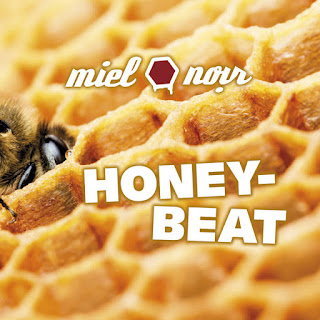 Electro  industrial  sounds  along  with  spoken  word  parts  start  off  the  album  and  a  few  seconds  later  clean  singing  goth  vocals  are  added  onto  the  recording  and  most  of  the  beats  are  programmed  and  the  music  also  gets  very  experimental  at  times  and  on  later  tracks  electric  guitars  are  utilized.


Posted by OccultBlackMetal at 4:26 PM No comments: 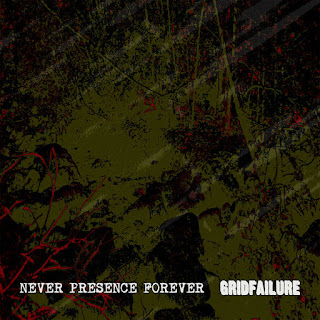 Their  side  of  the  split  starts  out  with  electronic  drones  and  elements  of  dark  ambient  can  be  heard  at  times  along  with one  of  their  tracks  being  very  long  and  epic  in  length  and  their  music  also  incorporates  a  great  amount  of  soundscapes  and  after  awhile  elments  of  hardh  noise  and  death  industrial  are  added  into  the  music  and  you  can  also  hear  demonic  growls  and screams  in  the  background  briefly while  shouts  are  added  onto t he  last  track  and  the  production  sounds  very  dark  and  raw.

Next  up  is  Gridfailure  a  solo  project  that h as  been  featured  before  in  this  zine  and  plays  a  mixture  of  experimental,  industrial,  ambient  and  dark  hardcore.


Posted by OccultBlackMetal at 3:13 PM No comments: