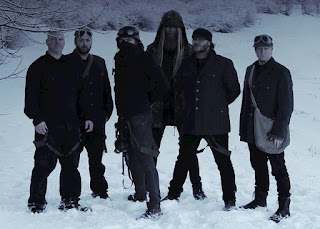 1.For those that have never heard of you before, can you tell us a
little bit about the band?
Rune: We are Drontheim from Trondheim, Norway! We are a 6 piece
conceptual bandproject consisting of comrades and partners in crème from
other musical endeavors. We play a dark, melancholic- mixture of many
genres, but rooted in the industrial,cinematic metal landscape.
viNd: Drontheim is a strictly non-political output with no collective
agenda on any level except the artistic. Thematically it is rooted in a
strong interest in the second world war in general, and more
specifically the events, people and life as it were in Trondheim, Norway
in the early 1940'ies, and also the German vision for Neu Drontheim -
New Trondheim - the new capital for the Germanized Scandinavia.
Lyrically it can be considered part documental and part fiction, but as
a whole it is focused on the dark and dystopian union of audible,
lyrical and visual expressions that enables the artistic atmosphere
Drontheim seek to provide. Not easily defined by limiting genres, but at
times cinematic and atmospheric and at times distorted and strict; one
can find traces of industrial rock, metal and electronic music.

2.Recently you have released a new album, can you tell us a little bit
more about the musical style you went for on the album?
Rune: The album consists of a collection of tunes from the last 12-13
years. Something with Norwegian lyrics, pure studio-Jams,
improvisations, one instrumental, many soundscapes and a few tight
pieces on the harder side of the scale. It is a very varied album that
takes you on a roundtrip through moods, histories and sensations based
around our conceptual storytelling.
viNd: Well, 1st of all we could say that its heavily themed around a
naval WW2 concept. The title "down below" is a reference to submarine
naval warfare and the unmarked grave for many unlucky sailors during the
naval campaigns of WW2. Its like infernos and screams above, silence and
darkness down below. And on this album we dived into the ocean and got
pulled down below. I can also reveal that the next Drontheim album will
be "running into the infernos and screams above"...

3.The band has been around since 2006 but waited until this year to
release the first full length, can you tell us a little bit more about
the long wait?
Rune: All members of Drontheim are involved in other musical projects
and band settings, and the band has evolved slowly- finding new
directions and working methods along the way. We have never rushed
Drontheim, but had a steady production of finished tunes and ideas for
new material. As mentioned earlier- the tracks on the album are just a
collection of our material so far... There is, of course a lot of
patience needed within the band, for when members are busy elsewhere- we
need to keep the focus right, and just trust in the concept and hold a
steady course. But the patience has been worth it! We are happy with our
album "Down below " - and we hope to spend more time together presenting
our music.
viNd: It's about time, timing, not rushing and releasing something we
feel good about. It took us much longer time with down below than we
expected for many different reasons, but I think and hope we have
learned from that so the next one will run smoother in our music
factory.

4.Most of the band members have a background in black or extreme metal,
what was the decision behind going into the musical direction the band
went for on the recording?
viNd: Well, 1st of all I created Drontheim back in 2006 during a hiatus
in my other bands (Atrox and Manes). Back then I also started to watch a
lot of documentaries about the second world war and it inspired me to
write music. And its like when I write music I often feel where the
music belong, like what project this tune should be placed into;
sometimes its Atrox, others Manes. And after writing the 1st songs I
knew that this was not Atrox nor Manes, but something new. Thus a group
of comrades I knew were recruited to get the project off its feet and
Drontheim was established.

5.A lot of the lyrics deal with WWII, History and Dystopian themes, can
you tell us a little bit more about your interest in these topics?
viNd: I started to watch a lot of documentaries about the second world
war and it inspired me to write music. It just happened like; after
watching some WW2 stuff, I just had to write music. I was ful of stuff
from within, and after writing some songs I also think I (re)discovered
why, and that was due to my grandfathers. They were both in the war (on
the allies side), and I remember they used to tell me a lot of stories
about it (WW2) when I was a kid. The first time I got to hear the name
Drontheim was via my grandfathers when they were telling me about stuff
they experienced during the second world war here in Trondheim. They
also pointed me in the direction of the vision the Germans had for
creating «Neu Drontheim» (New Trondheim). So thats how I got interested
in the second world war history in the first place. And how I see it,
its like they made me start Drontheim and I´m grateful for that.
The alternative history, or what we call docu-fiction allows us to play
with the "what ifs" and parallel universes of a world at war. We dont
have to stay to the facts, and it also allows us to skip the use of
symbolism we dont want to be related to. Along with that we also get to
build our own universe inside a very well documented time period, and
also speculate in alternative after maths...

6.What is the meaning and inspiration behind the name 'Drontheim'?
viNd: Drontheim or «Neu Drontheim» (New Trondheim) was the vision the
Germans had for creating a new German metropolis in German-occupied
Norway, and it was planned to have a population of around
250,000–300,000 inhabitants. The building site of the city was located
15–20 km southwest of Trondheim. Because of the significant strategic
importance of the Trondheim Fjord to the German military, it was to be
constructed in conjunction with a major navy and military base that
would give Germany unprecedented maritime control over the North
Atlantic area. Hitler stated that the city was to become "a German
Singapore", and it eventually became one of his favorite architectural
projects. To organize and carry out the necessary planning for the new
project, Hitler appointed Albert Speer. The city was to house an
enormous art museum for the northern part of Germany′s empire,
containing "only works of German masters". An Autobahn was to be
constructed to Trondheim across the Little and Great Belts of Denmark
and further through southwest Sweden and Norway to connect the northern
outpost with Germany proper. The naval base itself was planned to
contain extensive shipyards, docks and U-Boat bases for the expected
post-war German navy that was to consist altogether of several hundred
submarines and dozens of super-battleships, as well as several aircraft
carriers. It would, in Hitler's words, render British Singapore "mere
child′s play" by comparison as a military stronghold.
In 1943, the first ground detonations were begun. To provide the
construction site with labor, a prisoner-of-war camp was built in
Øysand. A reserve landing strip for airplanes was also put in place.
Special maps were prepared for Hitler from which he studied the optimum
positions for the docks and accompanying structures. A metres-wide,
highly detailed miniature model was also built for him, which was
destroyed during an Allied bombardment in Berlin in 1945. During the war
itself, the port city was already turned into a major base for German
U-Boat submarines, Dora I.

7.Can you tell us a little bit more about the artwork that is presented
on the album cover?
viNd: As we told earlier the title "down below" is a reference to
submarine naval warfare and the unmarked grave for many unlucky sailors
during the naval campaigns of WW2. Infernos and screams above, silence
and darkness down below. The design of the album is based around this,
and several of the other songs and videos also plays around this theme.

8.What are some of the best shows that the band has played so far and
also how would you describe your stage performance?
viNd: I will have to say that the best show is yet to come! With
Drontheim we can scale the stage performance from stripped (acoustic) to
full frontal attack. This also goes for the production we do, with the
gear, gadgets we use and what we´ll do on stage.

9.Do you have any touring or show plans for the new album?
viNd: This is something we´re working on at the moment, but the dates
and cities are still not 100% set. We hope we can share some light on
this soon, as the band is ready for doing some great kick ass shows. So
I will just have to say; tune in on www.drontheim.no and stay informed
;)

10.On a worldwide level how has the reaction been to your album by fans
of metal or other genres of music
viNd: It is to early to say, but from what we have seen so far, the
feedback has been good. We are crossing our fingers for that more people
we check us out and join us down below...

11.What is going on with some of the other bands or musical projects
these days that some of the band members are a part of?
Rune: Both Manes and Atrox are creating new material, and planning some
live shows the coming year. Endapartoo (Runes sideproject) has just
finished an experimental album, and is currently planning publishing.
Snorre is working on a project called Helsinki Horizon, Eivind on Atrox,
Drontheim, EoP and Manes, and Steffen is working on THP (The Heisenberg
Project) - pre-producing material for an album that will be recorded
later this year.

12.Where do you see the band heading into musically during the future?
Rune: More of the same. More of everything that sounds good.
viNd: I already gave some hits about the next Drontheim album, so I
would have to say that the next album will have the sound and mood that
fits more with running into the infernos and screams that you´ll find
above the sea surface during wartime. I think we have 8 songs ready now,
and we hope hit the studio to record the new album sometime later this
year.

13.What are some of the bands or musical styles that have had an
influence on your music and also what are you listening to nowadays?
Rune: David Sylvian, Bowie, progressive bands, ambient soundscapes.
viNd: Documentary movies, soundscapes and for example BC, Black
Sabbath, Burzum, Ghost Brigade, Immortal, Katatonia, My Dying Bride,
Peeping Tom, Rammstein, Seigmen, Slagmaur just to mention some.

14.What are some of your non musical interests?
Rune: There are quite a diversity when it comes to our lives outside of
the musical box, and we use each others skills and knowledge within the
project. We have engineering people, visual artists, health workers,
sporty people, crazy people, fathers and family men- teachers and
inspirators, warehouse workers- and we like beer.

15.Before we wrap up this interview, do you have any final words or
thoughts?
viNd: I encourage you all to check out our new album - give it a spin
and join us down below! I'm pretty sure that if you are into industrial,
alternative  metal, post rock, cinematic and atmospheric music you will
enjoy down below.

Posted by OccultBlackMetal at 5:27 PM No comments: