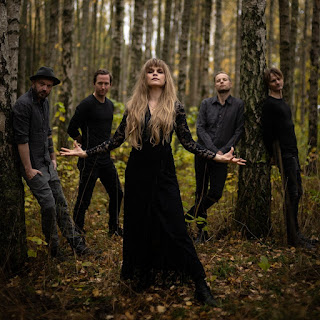 1.Can you give us an update on what has been going on with the band since the recording and release of the new album?

We have been able to do a couple of shows, but as for everyone else covid has put its limitations on our ability to tour and play concerts.

So, we have put our time and focus into creating new material instead and are currently working towards a new album.

Gåte is deeply rooted in folk music and folklore. It is in our Gåte´s DNA and has paved the way for all our musical outputs. We call ourselves folklorists, and see ourselves as vanguards of folk lore. Our mission is to convey and further this often forgotten folk tradition and show case the beauty and strength hidden in the stories, songs, ballads, legends and myths etc. of this tradition.

Our music has always been innovative, groundbreaking and different - rooted in cultural heritage and out musical tradition, without following the traditional rules and formulas.

With “Nord” Gåte too became creator in this tradition.  With the acoustic expression and through a cleaner and simpler soundscape, we have tried to create something we hope might seem even more authentic, beckoning people to join us in this journey back to the very roots of the vast Nordic folk tradition.

Approaching a more acoustic sound for Gåte also opened new doors and helped us see the music from a different stance. We felt we got even closer to defining our musical DNA and dare to truly expose ourselves and our instruments.

Gåte has always been a force - using all means possible, maximized the esthetics, and exaggerated everything. This time we wanted to peel everything down to the core and see what lay beneath all the extravagance. "Nord" is the result of this process.

3.What are some of the lyrical topics and subjects the band has explores with the new album and also how would you describe your progress as songwriters over the years?

Most of Gåte´s songs are our take on traditional Norwegian folk songs from the early 18th century. In recent years we have also worked with the great Norwegian folk musician Knut Buen, whom must be considered a guru within the Norwegian folk music scene, and we have had the honor of being able to adapt and incorporate some of his work into the Gåte portfolio.

As part of the folklorist tradition our goal has been to convey existing tradition in a way that resonates with a more people and to mew generations. As such few of our songs are originally written by Gåte. They are narrated, arranged, and reinterpreted by us.

The themes of the songs vary, but some of the themes we often find repeated are the agony of forbidden and lost love, life and death, and old myths and legends.

4.The band was broken up for a hew years, what was the cause of the split and the decision to reform?

Gåte started up back in 1999. And had sudden and fast rise to national fame.

At a point where the band, and especially I (Gunnhild) was very young.

Turning into an adult whilst playing in a successful rock band, with all the work, focus, and media attention that entail, is heavy.

At the age of 20 in 2005 I needed a break. I felt the need to figure out who I was outside of Gåte and explore my own path as an artist, and so we put Gåte on hold.

I quickly got involved in acting, and built myself a career as a actress before we relaunched Gåte back in 2017.

5.What is the meaning and inspiration behind the name ‘Gåte’?

A direct translation would be “enigma”.

It was actually the name of one of Sveinung Sundli’s musical projects back when he was in high school.

When Sveinung and I were set to do our very first show with what would become what we know as Gåte today, we hadn’t really thought of a name.

Right before we were to go on stage, they asked us what they should present us as and we just decided on Gåte right there and then, and the name stayed.

It just felt right. We are Gåte, and our music and will always be genre-bending and enigmatic.

The cover is designed by an amazing designer called Martin Kvamme.

It is actually a collage taken from various nature photos. As Nord is an album taking us back to our roots it felt fitting to go to nature for the artwork.

And just like the songs, the artwork turns into this half dreamscape half real imagery of something frozen in time but at the same time eternal.

7.What are some of the best shows that the band has played over the years and also how would you describe your stage performance?

We’ve played such a vast amount of shows that it is hard to pick favorites, and live show has always been paramount for us. One of the major elements of our breakthrough back in the early 00’s was our live performances. To this day we are perhaps best known for our grandiose, intense, and energetic live shows.

If I have to choose though, I guess playing at the Roskilde festival back in 2003 stands out as a great and important moment for us.

8.Are there any touring or show plans for the new album?

9.The new album was released on 'Indie Recordings', how would you compare working with this label to other labels you have been a part of in the past?

Indie Recording is an independent label based in Norway, and it has been great to work with someone that levels with us in the goals and visions for Gåte.

Moving to an independent label felt like a natural decision when we decided to revive the band. Previous partnerships have been great, but we wanted to have more control and stay in closer contact with every person involved in our music and the realization of the actual album. That said our last album from 2018 was also on an independent label, but Indie Recordings is perhaps the Norwegian label with the deepest roots in the metal and alternative rock scene, where we also find most of our fans. When we were presented to the possibility of joining forces with them, it felt like the natural choice.

10.On a worldwide level how has the reaction been to your newer music by fans of folk and progressive music?

We feel the reception has been great!

People seem to be really open towards Gåte and our music, and we can se that our international fan base has grown and is growing with the release of Nord

I think the average music fan in 2022 is more open to explore new bands and new music than ever before. Something that, in addition to music in general being so available, is a great asset for an alternative band like Gåte.

11.Where do you see the band heading into musically during the future?

This is kind of hard to verbalize, but our main goal is always to keep on growing and evolving. Through the making of Nord we opened up for a totally new way to find inspiration and explore music, and we are in phase now where we allow ourselves to experiment even more with the familiar Gåte sound.

12.What are some of the bands or musical styles the band members are listening to nowadays?

As a band we have a very varied and broad taste in music across the group. But as for musical inspiration for Gåte we look towards bands like Garmarna, Wardruna, Gjallarhorn, Valravn, Heilung Kati Ran and Eivør.

13.Does Paganism play any role in your music?

No, and we don’t consider ourselves pagan. That said we do find inspiration in the archaic, and in our cultural heritage, including elements from Norse culture and mythology.

Thank you for the interview! And an even greater thank you to all the people who have listened to Gåte or are about to do so for the first time.

I hope you will continue to follow us on our musical journey!

Posted by OccultBlackMetal at 7:42 PM No comments: