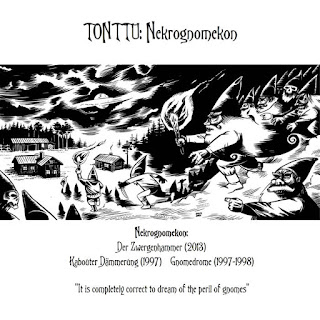 This  is  a  review  of  another  recording  from  Tonttu  which  continues  their  martial,  industrial,  neo-folk,  metal  sound  with  the  album  being  released  by  Panicmachine  in  2013  and  called  "Nekrognomekon".

The  album  starts  out  with  distorted  loops  before  adding  in  acoustic  guitars  and  a  more  neo  folk  sound  and  after  the  intro  symphonic  and  classical  elements  are  brought  into  the  recording  along  with  samples  and  spoken  word  parts  which  also  leads  up  to  militant  drumming.

http://digital.panicmachine.com/album/nekrognomekon
Posted by OccultBlackMetal at 10:16 PM No comments: 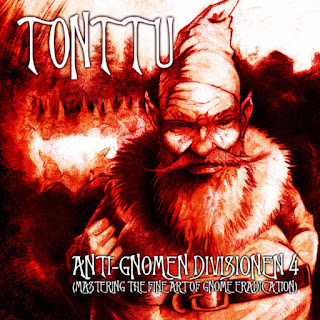 http://digital.panicmachine.com/album/anti-gnomen-divisionen-4-mastering-the-fine-art-of-gnome-eradication
Posted by OccultBlackMetal at 10:07 PM No comments: 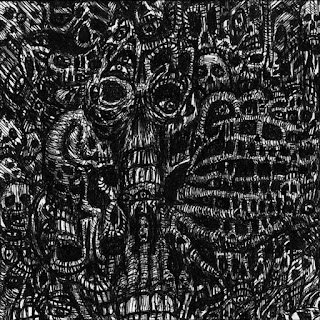 Posted by OccultBlackMetal at 7:31 PM No comments:

1.Can you give us an update on what has been going on with the band since the recording of the new album?
Since the last album? Nothing good really (...) in between scrap album and musical project. I have lost a tremendous amount of time for absolutely nothing. I am very unsatisfied and critic when it come to my work. I can write and compose for week's, to finally erase it all on a whim! Two and a half album and also tree others musical project have been put to there a end. Beyond that, i am currently composing a original sound track for the tabletop RPG Millevaux whit the help of Ruin from "Loki Fun Lilith" and Klver, two experimental dark ambient french artist. I also work for media of all sorts (publicity, TV...). Slowly, at my own pace, i am trying to make room for myself in the video game industry. Although i don't honestly think i have the patience to go all the way with this industry full of delusion and idiots, and i am a stubborn bastard!

2.You have a new album coming out in the fall, can you tell us a little bit more about the musical direction it has taken and also how does it differ from your past recordings?
Yes, i am supposed to release a new album (ATLAS) at the end of the year. But as i previously said, this work, like any other before it, is far from being shelter from a musical genocide. As for the artistic direction, compared to my last work, i have opted for a more uncanny and martial/orchestral approach with a little pinch of drone. further more, inspiration coming from motion picture soundtrack might be seemingly more present. for the time being, that all i have to say about it, it is in a early stage of gestation.

3.What are some of the themes and concepts you bring out with your music?
There is no grandiose philosophical ideal behind Nors'klh. No particular dogma or political believe, just fiction and imagination The theme is very simple: the destruction of the universe by a gigantic sprawling living celestial object, being that is, who is full of schizophrenic thoughts and desire to re-create space and time to its own liking. My work must be see a movie without image (for the time being). Each of them (apart from ANT) depict a part of that tale. There is also, of course, a lot of personal felling infuse in this endeavor. I tell you more about that in my answer to your next question.

4.What is the meaning and inspiration behind the name 'Nors'Klh'?
Nors'klh is born about 10 years ago from a violent bad trip at that time, i was disturbed, i was taking a lot of drug and was over drinking. I was literally becoming paranoid and schizophrenic. One night, i toke more that i can handle, and i saw this (...) Thing (...) this huge mountain right in front of me. His tentacles reaching for the stars. A sandstorm was burning my eyes but i could see it! I was frighten like hell. During the time i was senseless, a ghastly and cavernous voice coming from that mountain scream a word? A name? Nors'Klh, it was so weird. The morning come and that vision have shape my work the way it is now. Before that i was composing more extreme and noisy industrial stuff, with machinery sound. I didn't really know how to translate that word, i probably could have write it in hundred other way. I chose the more graphic and unpleasant way to pronounce it! I have stop taking drugs and i barely drink now a day, but i still can see that Mountain.

6.According to the fb page, the band is signed to Alchemic Sound Museum, can you tell us a little bit more about this label?
Alchemic Sound Museum is my own label with Ruin and Klver. Before that it was a label from Quebec owned by my friend V.V. Anxietas. He generously sell us is creation. So yeah, the contract was easy going, thank you. But i should have read more carefully the small character (...) Joking apart, til that, all my work was free download release, it was working well, my music got downloaded more than i expected, but i wanted to go to the next step, with a release on a CD. I look for a Label capable to produce my work. I got few offer, but nothing came to fruition. When me and my colleague got our hand on ASM, i took the opportunity to make our first production a Nors Klh Album. That way i could have full control over the final result.

7.A few years back you put out a split album with NauseA, what are your thoughts on the other band that participated on the recording?
The Split with NauseA is one of my best memory. I am a fan of the shadowy and depressive sound of Jacek (the man behind NauseA) So, of course, the proposition was trilling me. Although he doesn't know, i own him a lot. Is one of those artist who give me the desire to hold-on to my delirium. I sincerely regret the fact that he have stopped make music. Is sensitiveness and is art is something missing from the underground and i don't think i am the only one thinking this.

8.On a worldwide level how has the feedback been to your music by fans of dark ambient and industrial?
I don't have any idea! I have few hard-on fan who are closely following my work and giving me support. But "Worldwide" seems far fetch for me, i mean, i am in the underground underground. Scratch more, and you will see me reach the core of the earth.

9.What are some bands or musical styles that have influenced your music and also what are you listening to nowadays?
I listen to absolutely all. Rap, hip hop, rock, electro ... obscure underground chinese band, german, mainstream music. My ears can be find anywhere. But i have more affinity with metal, i don't try to hide it. I am a kind of a newbie in therm of Martial / experimental and dark ambient music. What bring me to new horizon musically are the other artists and groups with whom I sail on the sea of underground music. To close that subject, something that may seem odd, my own music is inspired by a french artist call William Sheller (the track "Toholl" especially ), this as nothing to do with my own sounding, but without him. Nors'Klh would in a different form.

10.How would you describe your views on Occultism?
My angle of view on the occult topic... A endlessly vast question, i don't really like to tackle. To make it brief, i am a ex lavey satanic doctrine follower. My inner self being chaotic and schizophrenic, my belief tend to be not be consistent, start and stop believing at will ( disturbing pace.)

11.Do you have any non musical interests?
I have all sort of non musical interest: my wife and my child! beside that, i paint and draws some comics. I have also slowly begins to look into computer assisted animation, and of course, i am a big geek and proud of it.

12.Before we wrap up this interview, do you have any final words or thoughts?
Of course, i thankful to you, to gave me the opportunity to share with you. This was a great pleasure. I also like to use this opportunity to thank "Le Piment Noir" (My ex graphic designer and musical genius.) This little fool to who i owe a lot, and is doing my musical education, and to my two accomplice Ruins and Marionita Paige with who i work from time to time.

https://norsklh.bandcamp.com/
Posted by OccultBlackMetal at 4:17 PM No comments: 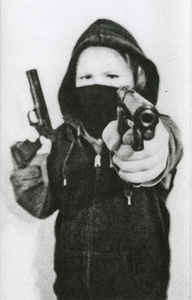 The  ep  starts  out  with a  dark  avant  garde  sound  along  with  industrial  beats  and  synths  as  well  as vocals  that  border  on  black  metal  before  adding  in  spoken  word  parts  and  clean  singing  and  they  have  a  more  underground  industrial  feeling  this  time  around.

As   the ep  continues  the  music  gets  more  dark  and  experimental  as  well  as  bringing  in  neo  classical  sounds  along  with  some  electronic  pop  as  well  as  a  militant  feeling  and  in  certain  sections  of  the  recording  they  bring  in  traces  of  noise  music  without  having  the  harsher  elements.

https://www.youtube.com/watch?v=dJBbQ-8DOEU
Posted by OccultBlackMetal at 3:12 AM No comments: 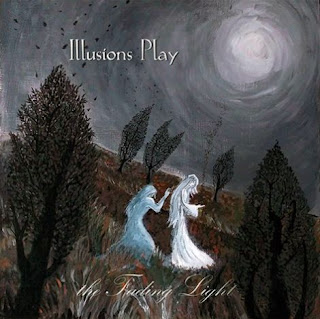 The  album  starts out  with  dark  and  atmospheric  sounding  synths  which  also  bring  in  a  very  tragic  feeling  as  well  as  bringing  in  melodic  leads  and  programmed  drums  along  with  melodic  female  vocals  before  going  into  a  heavier  direction  and  adding  in  death  metal  vocals  and  after  awhile  violins  and  whispers  find  their  way  on  to  the  recording.

Posted by OccultBlackMetal at 10:05 PM No comments: 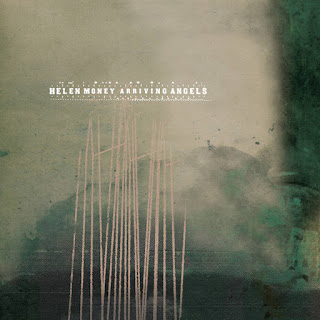 http://www.corpseflowerrecords.bandcamp.com
Posted by OccultBlackMetal at 6:09 PM No comments: