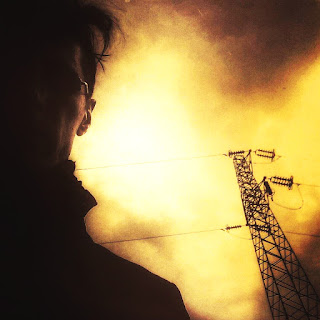 1.Can you give us an update on what has been going on with the musical project since the recording and release of the new ep?

I am currently writing new songs and refining other compositions that are going to be released soon.

I combine music composition with the study of the topics covered, merging myself as much as

possible with a specific psychic environment.

2.In December you had released a new ep, musically how does it differ from the stuff you have released in the past?

"Aion" has more metaphysical and ascetic temper; that's the reason why I used less rhythmic drive,

since rhythm is more linked to the instinctive human nature. Regarding the harmonic structure, I

monoideism, pivotal of the ascetic process.

3.This is also your first release since 2015, can you tell us a little bit more about what has been going on during that time frame?

"Golden Catrame" label. In there I have collected compositions produced between 2012 and 2020 but

absent in the 2015 album "Black Summer of Trisomic Lovers". True to be told, in recent years I have

been quite erratic in composition due to the economic and job instabilities I had to face.

4.The song themes on the new ep cover Occultism, Gnosticism and Alchemy, can you tell us a little bit more about your interest in these topics?

Since I was a teenager, I had the suspicion that the totality of existence does not resolve itself inthe mere

material aspect. Therefore I have been attracted to books, comics and films that concern topics such as

At my 20's, I discovered Julius Evola and the cultural movement of Traditionalism (authors such as Guenon,

Schuon and others). Thus, I integrated these interests into a more organic concept of spiritual evolution by

approaching doctrines as Alchemy, Hindu, Buddhist and Islamic asceticism. Recently I have tried to

deepen the Gnostic and esoteric thought of the first centuries of Christianity.

5.What is the meaning and inspiration behind the name 'NCT333'?

"NCT" is the beginning of my tax code.

The number "333" is taken from Crowley's kabbalistic exegesis in reference to the entity “Choronzon”,

whose function is to nullify the ego. The name therefore represents the purpose of dissolution of the false

ego, referring to the social and psychic aspect of profane individuality, linked to "name" and "form".

6.Can you tell us a little bit more about the artwork that is presented on the ep cover?

The artwork for "Aion" is edited by Ubu Khan. The image was chosen because it encloses the colors of

manifestation during the contemplation of a void corner, an image strictly close to mental stillness as a

necessary mean to perceive the subtlest aspects of reality.

7.Have you done any live shows with this musical project or open to the idea?

So far I have never managed to find legitimacy for my electronic live. For about 20 years I have been

wondering what form it could take to acquire meaning. I played my own compositions while performing

as a DJ, but I never did a real live show with this project. It is my intention to do a full live when I'll find

8.The new ep was released on 'Ukhan Records, can you tell us a little bit more about this label?

style which get correspondences with my works. For this reason I decided to collaborate with them as an

artist and as artistic producer for other artists's releases under the label, scheduled in 2021.

9.On a worldwide level how has the reaction been to your music by fans of dark ambient and industrial?

Thanks to the work of the label, this is the first time that my works are known abroad. I have received

interest good feedback from America to Eastern Europe and this makes me very proud.

on magazines and webzines at the moment. For this reason, I sincerely thank those who like you, with

sincere interest and genuine passion, has give me space to

10.Where do you see yourself heading into musically during the future?

tradition. I would like to be able take possession of these expressive codes and combine them in my

musical production. Also I would like to write soundtracks for videogames which, in many case, have

industrial. In the first teen-age I was also listening to extreme metal (mainly black, death and doom)

influenced by a dear friend (owner of the black metal band "Fear of Eternity") who was very passionate about this genres.

that dealt with these sounds. My favorite electronics bands are Scorn, Coil and Pan Sonic. Nowadays I

am very interested in some aspects of the louder and noisy Shoegaze, for example I am literally in love

with the sound of "A Place To Bury Strangers" and I really appreciate some works of "Raveonettes",

"Singapore Sling" or the Italians "Kill Your Boyfriend ". I'm also intrigued by the sound of so-called

become, and are likely to become more, harder and it is easy to get discouraged and collapse. In this

situation, my humble advice is to take advantage of it to discern the most futile aspects from the important

ones of existence and work on it, not letting yourself be involved, more than necessary, by the silly

diatribes and false problems that characterize and substantiate this era of chaos and dissolution. In

conclusion, I would like to thank my woman and close friends who have supported me so far in this