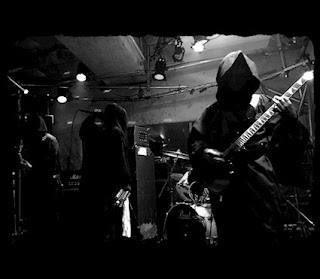 2.Recently you have released your first full length, musically how does it differ from your previous demo's and split's?

It became much more extreme death/doom compared to previous releases. And lyrics deal with omnipresent matters.

3.What are some of the lyrical topics and subjects the band has explored so far with the music?

In early days, our lyrics dealt with death or agony, which were cliché, weak and too personal. After we relased the song "Ouroboros"(from split with SOL) in 2016, we became conscious of dealing with philosophy/bloodline from ancient time till now as a lyrical theme. As for the lyrics of "産女(Ubume)"(from Eastern Ghost Story Comp.), it deal with Japanese legendary ghost "Ubume". Baby come from ther underworld to mother's womb. During he/she come through the mother's birth canal, his/her defilement is divided and is born to this world. But if mother and baby died before its birth, mother become the ghost Ubume. The lyrics portray the world of no-life(not simply death) in the view of those who can't come to this world.

4.The band has been around since 2011 in its current incarnation and while you have had a few smaller releases you waited until 2020 to release a full length, can you tell us a little bit more about the earlier days?

In early days, we tried to establish our own sound with a lot of experimentation while we were recording demos and were playing at small venues in our hometown.

5.The band started out as 'C'est  la Guerre', what was the cause of the name change?

After the vocalist left the band, we changed our name to current one and started as a new band.

6.Also under your older name you also wrote some satanic topics, does occultism or Satanism still play a role in your music?

It's sure that there are a few influences from them, but not so much. We are totally different band after we changed the moniker.

7.Can you tell us a little bit more about the artwork that is presented on the new album cover?

It represents the ancient "the origin of life" and "blood". The positive and the negative are attracted each other, then they get birth to new life and finally they return to the earth. Such a lifecycle going on, DNA and philosophy will pass on next generation. Especially, this artwork represents the core of life.

8.Has the band had any opportunity to do any live shows?

We had played in Japan and Taiwan.

9.The band also has been a apart of a good amount of splits, can you tell us a little bit more about the bands you have shared these recordings with?

We released 2 split CD with Australian Estrangement and Danish SOL. And we participated in "Eastern Ghost Story" Comp. 12" and we share the vinyl with Chinese Harfluss, Korean Aek Gwi and Japanese カルマ納骨堂(Karma Ossuary). All of them are very unique and great bands.

10.On a worldwide level how has the reaction been to your music by fans of funeral doom metal and experimental music?

I think we are still regarded as a band from exotic countries.

11.What is going on with some of the other bands or musical projects these days that some of the band members are a part of?

Unfortunately, we have stopped all activities for a while by Covid-19 pandemic...

We have no idea at the moment. Perhaps, we go on the same path.

We are influenced by many genre of music consciously and subconsciously. We are always listening to any kind of music.

Please listen to our album!

Posted by OccultBlackMetal at 7:57 PM