The duo was born in 2018 as a studio project focused on a particular style of Funeral Doom Metal, played with bass instead of guitar and strongly influenced by atmospheric hues and orchestrations. We also used a peculiar 436 Hz tuning on every line (apart from the vocals) that adorns the overall sound with even more decadence.

We love to wander in abandoned places and cemeteries in particular, we're also passionate about nineteenth-century culture, especially as regards the English Victorian age.

In our lyrics we try to immerse the listener in an elegantly ruined world, through many scenarios treated also from a narrative point of view.

2.In 2020 you had released an album, can you tell us a little bit more about the musical style that you went for on the recording?

2020 was our debut year with "Obsequies", a 50-minute, 7-track album recorded with various difficulties due to the pandemic. The record was in fact to be released around the middle of the year but the release date was November 25 instead. However, we tried to use this hitch to our advantage by refining the songs and the final result we wanted to achieve. During those months we experimented with atmospheres that could really envelop the listener's mind, adding some synths in the background for the purpose. Synths have always been pretty important in Funeral Doom and we also wanted to find ways to implement them with our own personal touch.

3.You refer to your musical style as being '19th century funeral doom metal, can you tell us a little bit more about this term?

We like to define ourselves with this term because we have always thought that Funeral Doom could be a genre with very 19th century roots. If the growl technique had been discovered at the end of that period, for example, with the right orchestra and percussion settings, something really incredible, deep and intense would have come out. Of course it wouldn't be metal, but already in those years the culture for slow, decadent and melancholy classical music was quite widespread (just think of the funeral marches). Well, we imagine and try to shape that vision in our songs by making use of a distortion that is not too scraping and aimed at enhancing the atmosphere rather than adding heaviness or aggression.

In some sessions the distorted bass blends in an almost prophetic way with the orchestrations, creating a single line with an extremely unique and antiquated taste. We love this particular style very much and will definitely try to experiment with both more powerful distortions and more complex orchestrations in the future.

4.What are some of the lyrical topics and subjects the band explores with the newer music?

Well as previously said we like to tell about abandoned places and relative narrative situations, but we will also range and space on mythology and human perdition. Lyrics are as important to us as music and not just a filler, so we take a lot of time to think about it and find the right ideas and words.

In the opening track, "Eloquence of the Doomsday Fog", we imagine the end of the world where thick mists take over Earth and prevent light from reaching it. Time flows inexorably and is oxidized by the fog, which thickens more and more and remains the only witness of eternity. In the second track we talk about Eurynome but always in the context of a disastrous end for humanity. Later we will wander through overgrown cemeteries and solitary crypts... but we leave you the pleasure of immersing yourself in the music and delving into the stories!

5.You also use the bass guitar as a lead instrument instead of using a regular guitar, can you tell us a little bit more about this approach?

Guitars have obviously always been the protagonists in metal, but this doesn't mean that they cannot be completely replaced with other similar instruments and groped for new styles and atmospheres.

We love playing bass and with the right tricks it can become a great alternative to the guitar.

In particular, we greatly appreciate the more present bass frequencies, the softer and fuller notes.

Used as a leading instrument, the high notes take on a totally different flavor than the guitar, and for our purpose this result is perfect and allows us to express ourselves at our best.

6.I know that the band's name comes from Greek Mythology, can you tell us a little bit more about your interest in this topic?

Greek mythology is full of situations, anecdotes and characters that lend themselves perfectly to metal lyrics. A multitude of interpretations and narratives, metaphors and allegories can be used that allow you to tell practically anything you want through this ancient legacy.

Eurynome was a creator goddess of the universe but later relegated to the underworld (with the name of Eurynomos). We are inspired by this mythological dynamic to think and shape lyrics in different contexts.

7.Can you tell us a little bit more about the artwork that is presented on the new album cover?

The front cover is actually one panel of a larger single illustration. For our debut album we have in fact opted for a 6-panel digipak where each outer dover can be admired individually with its details and as a whole as a large narrative panorama (from left to right).

In the front panel we can see Eurynome dressed in mourning casting a last glance at the ruined and now buried humanity before finally leaving.

The used technique is "photorealistic collage" and it was all done on commission to dress our record with a continuous series of dramatic and refined artworks.

8.Currently there are only 2 members in the band, are you open to expanding the line up or do you prefer to remain a duo?

At the moment we don't feel the need to expand the band. We are perfectly in tune as a duo and we think adding members would lead to conflicting views rather than actual contribution. The project was born just as a duo and our will and to keep it that way. In the future, however, we could think of organizing a possible session band for hypothetical concerts. But for the moment, also given the pandemic situation, we are strongly focused on writing and releasing new music.

9.The new album was also self released, are you open to working with a record label in the future?

We found releasing our music as indie several difficulties and a big effort both in terms of time and budget, however it allowed us to realize numerous opportunities and merch otherwise difficult to reach with a label as a debut band. The satisfaction of achieving certain goals on your own and building an image with your own hands and efforts is undoubtedly priceless. At the beginning we sought the collaboration of various labels but we did not find any satisfactory proposals. At the moment, however, we are in contact with a publisher to release a possible reprint in different formats. We are also keen to release a vinyl edition of Obsequies and plan to get to work shortly if we see fan interest in the proposal.

For future albums we may be more inclined to collaborate with a good label right away.

10.On a worldwide level how has the reaction been to your music by fans of funeral doom metal?

We were surprised by the interest and support immediately shown by listeners of this genre, although our approach to Funeral Doom is particular and not exactly canonical. At the moment it seems that the greatest concentration of audiences comes from Italy, United States and South America.

However, we are very satisfied and pleased with the worldwide positive feedback for this project.

11.Where do you see the band heading into musically during the future?

We have a lot of ideas to put into practice that have blossomed consistently over the past few months. We think future releases will be full of news and a constantly evolving sound, while remaining solidly devoted to Funeral Doom, with atmospheric and symphonic influence still there.

This is an extremely versatile and flexible genre, it lends itself to many enrichments and we are not the types to fossilize on a single approach.

During the composing period we took a short break in listening to Funeral Doom to be not too influenced here and there by ideas that were not really our own. In the past years we have always been with our ears focused on this genre and we always liked to discover new projects and styles, although we certainly cannot speak of thousands of bands like the rest of common metal. We are linked to pioneering bands of the genre such as Skepticism, Funeral and Thergothon. However, we also gladly immerse ourselves in the sounds of Ahab, Bell Witch and Mournful Congregation.

In the end we think we have inherited something from each of these projects and we are happy that they have suggested and taught us something.

Thank you very much for the opportunity to express ourselves in multiple ways through these questions. We also thank all the supporters and also those who, just out of curiosity, will go and listen to our pieces after reading this interview. 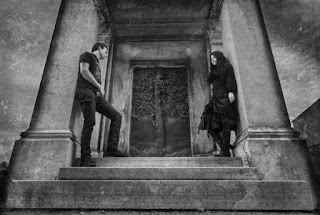