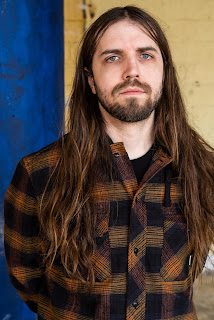 1.For those that have never heard of you before, can you tell us a little bit more about your solo project?

It's solo guitar music. My solo material started as more focused on composition, and less on atmosphere and effects. WIth the new album Human Shield, I've gotten a lot deeper into the drone and noise facets of the music.

2.You have a new album coming out during the end of July, can you tell us a little bit more about the musical style that you went for on the recording?

I would say the new album has taken the experimental components of my music to the forefront. I was really focused on texture, atmosphere, and allowing sounds to breathe while I was recording the album.

3.All of the music on the album was instrumental, are you open to working with vocals on future releases?

I might eventually incorporate some vocals, I've always wanted to dip my toe into doing that.

Pyrrhon has a fairly prominent improvisation and noise influence as well. There are sections of the latest Pyrrhon album that would fit in with my solo material.

5.Can you tell us a little bit more about the artwork that is presented on the album cover?

It's a collage that I made in photoshop, using a variety of images that I found striking.

6.With this project you record everything by yourself but have experience playing with other musicians, which one  do you prefer?

I think I ultimately prefer making music as a band, but there's something so immediate and fulfilling about dictating the entire process (including scheduling etc). I definitely want to make more music entirely on my own in the future.

7.The new album is going to be released on 'Nefarious industries', how would you compare working with this label to other labels that you have been a part of in the past?

Nefarious has been excellent to work with so far, they have a great roster of bands and they are super friendly and professional.

8.On a worldwide level how has the reaction been to your solo material by fans of harsh noise, experimental and metal?

I've only just started seeing the reaction to the new material, but people seem to be feeling it so far.

9.What is going on with 'Pyrrhon' these days?

We just announced a 2 week US tour this fall with Imperial Triumphant, so we're really looking forward to that. We've started dabbling with writing new music as well recently.

10.Where do you see yourself heading into as a musician during the future?

I want to continue to solidify Pyrrhon and my solo material. I might have another project or two up my sleeve, you'll just have to keep a lookout for that. I also recently started teaching guitar full-time, which I had been working towards for a while.

11.What are you listening to nowadays?