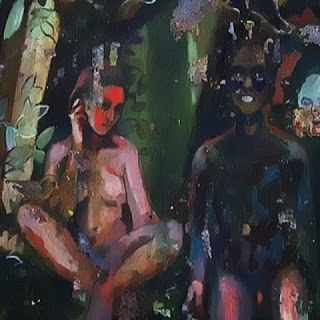 Well, we spent almost two years in the making of Ultratumba. It was hard work. The album was finally put out in February this year and what has come back so far is just great, we’re really happy with the feedback.

We’re quite eclectic in our approach to music and we’ve always been keen to explore different directions, hovering between the darkwave sounds of our early recordings and the harsher sounds of our last albums, but I’d say Ultratumba is our most rounded release so far.

3.This is also your first album in 15 years, can you tell us a little bit more about what has been going on during that time frame?

Our records are made over pretty long periods of time. I personally like the idea of waiting patiently for the right moment to start work on a project. With Ultratumba we just kept working on it, on and off, for several years until we finally decided 2 years ago it was time to go for it.

4.What are some of the themes the band explores with the new release?

We draw our themes from the bodily depths, from dreams and dark recesses of memory and experience, all soaked in the lore of Galicia’s myths and geography, and tinged with a lot of personal sadness. The songs sort of form conversations between ourselves, probably in an attempt to interrogate us about those memories and experiences.

5.What is the meaning and inspiration behind the name 'trajedesaliva'?

The cover is by French artist Emile Lagarde. Her paintings, just like the music, are very phantomic, with these ghostly, amorphous figures she creates suggesting an unknowable, unspeakable secret one cannot fully grasp. We came across her work by chance as we were well into the recording of Ultratumba so it was all a happy accident that she ended up working with us on the album. We couldn’t have found a better artist to visually represent what Ultratumba is about. The magic of Ultratumba is also in these visual creations of her.

7.Currently there are only 2 members in the band, are you open to expanding the line up or do you prefer to remain a duo?

That’s right. On Ultratumba it’s just the two of us, and we’re happy just being a duo because we’ve known each other for more than 20 years now and we understand each other perfectly, but the rest of the lineup has always been pretty much in a constant flux, and so in the past we’ve allied with different musicians on different instruments: acoustic drums, accordion, sax, trumpet or guitar, depending on the specific sound we were trying to capture.

For our next project, we’re actually teaming up with Amaya (Maud the Moth) to release a collaborative album, loosely based on the life and works of Spanish-Mexican painter Remedios Varo. It’s always really exciting to have the chance to work with such talented and like-minded artists, like she is to us!

8.Currently the band is unsigned, are you looking for a label or have received any interest?

Well, we’re not technically off-label as we are currently sort of supported by 3 labels, which have contributed to the production and distribution of the album. But other than that, we’ve practically taken care of the whole thing ourselves. For us, it’s important to maintain as much control as possible over our work.

9.On a worldwide level how has the reaction been to your music by fans of dark ambient, drone, industrial and noise?

It’s been amazing. The album’s been getting hails from all over those scenes and we couldn’t be happier. We didn’t think it would be so well received though, because it’s a pretty weird and unsettling album that doesn’t sit in one clear genre. All the attention it’s been getting has come as an absolute surprise to us.

10.Where do you see the band heading into musically during the future?

We’re in a good place now, feeling really confident and focused, and already in the process of devising our next steps, at least the part where you create the moods, the mental sketches, and think about all the elements you want to experiment with. We’d definitely like to keep and expand the organic side of our music, which is based on analogue synths run through pedals and played live, without the use of sequencers or programming, but probably going for a more repetitive tone.

11.What are you listening to nowadays?

We are interested in a little of everything but very much drawn to artists that have a unique personality, like Nico or Diamanda Galás. Nowadays I’m listening to quite a lot of experimental, ambient and electronic: Clarice Jensen, Kali Malone, Faten Kanaan, Espen Lund...

Thanks so very much for the interview!

You might want to check these videos created for two of the tracks on Ultratumba: Arenas calientes and A casa por las vías.

Posted by OccultBlackMetal at 9:38 PM