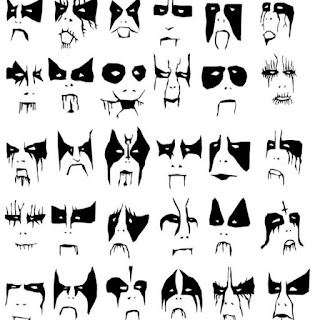 Gary: we are a new kind of black metal in that we aren’t metal at all. We have taken our new found love of new wave and our long time affair with the devil and made something lust filled, and sensually evil.

2.You label your music as 'blackened new wave', can you tell us a little bit more about this term?

Ringwald: How else would you describe danceable troubadouring for the devil’s love?

3.The band formed out of the ashes of 'Corpse Cvnt', what was the decision behind breaking up that band and forming a new one?

Gary: I am not sure what happened in the woods on the photo shoot. This is something no one likes to talk about. All I know is they were out there a long time with little resources. The desire to serve the dark master has never left Ringwald, Helmut, or Cannibal. I think they just needed a new way to express it and I am lucky enough to help.

4.What are some of the lyrical topics and subjects the band explores with the music?

Ringwald: Lust, desire, the freedom that comes from surrendering to the dark. The empowerment one receives from the mantle of Satan.

5.What is the meaning and inspiration behind the name 'Corpse Paint And Dayglo'?

Cannibal: We honor the traditions of our past and our future. We dawn our armor and war paint while sharing our beautiful and bright future with the morning star.

6.Has the band done any live shows or are there plans for shows on the future?

7.On the split you had also done some 'Immortal' and 'Dark Throne', covers, can you tell us a little bit more about your versions of their songs?

Cannibal: We pay tribute to our forefathers. We find the sexual side of the music. We find the true meaning and reshape it to spread the message more clearly.

8.Recently you where a part of a split with 'Death On Fire', what are your thoughts on the other band that had participated on the recording?

Ringwald: They were kind enough to work with us. They understand what we are doing. They don’t seem to be true believers in our faith. That said they are an excellent band. True professionals and they have a great sound for fans of that style.

9.On a worldwide level how has the reaction been to your music by fans of black metal, new wave and dance music?

Gary: I don’t know that the guys pay attention to that. They are focused on other things, mostly they serve the music. From what I have seen, it has been received quite well.

10.When can we expect a full length and also where do you see the band heading into musically during the future?

Ringwald: We serve the truth! Our sound is our soul, it will not change. We are true to blackened new wave!

Cannibal: Plans are in the works for a possible full length down the road but that is up to management.

Gary: They were on the edge of NSW, so I think they like a lot of those guys. Now though it is so far removed from that. We seem to listen to a lot of Talking Heads, The Cure, Duran Duran, The Smiths, and Depeche Mode.

12.What are some of your non musical interests?

Gary: I used to hike a lot. The guys are not big on hiking anymore though. For obvious reasons

Gary: Thank you for the support. Hail!!

Posted by OccultBlackMetal at 9:56 PM