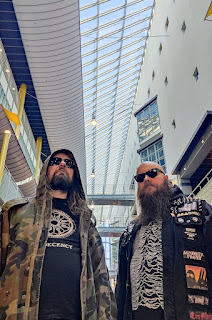 Sami: Me and Olli have known each other since the early 90’s, and for the last 20 years we have been talking about doing something together. Then when we finally started the “Chambers” it also took several years to be completed as we are very busy elsewhere. In the meantime I have been working with Reverend Bizarre, Opium Warlords, Tähtiportti, Spiritus Mortis, Azrael Rising, Pussies, and so on.

Olli: Even though we seem to come to the music field from totally different angles we actually have more in common than one would think. We share a generational experience and a deep fascination towards 80’s and 90’s alternative, underground, indie and DIY scenes in music, arts and culture in general. In that sense we speak the same language but small subtle nuanced differences in musical taste has drifted us to work on seemingly different genres. Working with Sami was very comfortable and easy.

2.In September you have an album coming out, can you tell us a little bit more about the musical style that you went for on the recording?

Sami: Musically it is a crossover/experimental/avantgarde album that can’t be pinpointed to any particular genre. The overall lyrical atmosphere is dark and hostile, but the music stretches from darkness to some kind of semi-light. But it is very nihilist work.

Olli: Years after we planted the seed of working together one day, I stumbled into Sami in Lohja. By then I had drifted away from Skweee music and was producing a more ambient, drone and noise related soundscapes for no particular reason. I played some of it to Sami, he liked it and we instantly decided that we will execute the long lived idea. Sami came up with the concept and lyrics. I did much of the pre-production while recovering from a hip surgery. The opiate painkillers took my straight edge mind to places where it hadn’t visited before. We also had great productive sessions in my then studio Clawztrophobia Chamber. They were somewhat free and unplanned yet determined and effective. We sort of let the music and sounds take us where it wanted to and took the end result as it was given, at the same time still being the masters of the process. That lead to the diverse but coherent album we now have.

3.Both of the band members come from musical projects that are the complete opposite of each other, do you feel that it adds to the originality that is presented on the recording?

Sami: Yes, definitely! Although on this album we shaked off most of our past projects and just worked freely as a team. I enjoyed it greatly! We both have a vast appetite for music from modern art music to hc punk and beyond. It all sounds here.

Olli: Yeah, we didn’t let our pasts dominate our future. We merely used what we knew as tools to achieve the entirety we wound up with. We both brought ideas from our own perspectives and worked our way together to the common ground.

4.The lyrics on the new recording are a concept album based upon the Buddhist Hell, can you tell us a little bit more about the lyrics and your interest in Buddhism?

Sami: Well, first of all, the lyrics are more like a modern reflection of those songtitles, which are each a chamber of this Hell, so I did not really write strictly just about the Buddhist Hell, but more like sucked an inspiration from it. But yes, I have had interest in Buddhism, especially Zen Buddhism since my childhood years. Later in my studies it became bit more scholar thing, but still interests me anyway, However I have to say that I am even more interested in Tibetan pre-Buddhist Bön religion.

Olli: Buddhism is one of the world religions or rather philosophy in which I can personally find some things to relate to as an agnostic. Of course there are bad sides to Buddhism as well as in any belief that has been institutionalized, but way less than for instance in the desert religions. It’s more peaceful and shows common sense rather than fundamentalist bigotry and proselytizing. Of course I’m not as aware of all the details as Sami is. He’s been studying these things a lifetime.

5.Throughout the album you also made references to other mythologies, can you tell us a little bit more about the mythologies you referenced with the new album?

Sami: Actually I am not sure do I know what you mean… to me those lyrics are very closely tied to so called every day life. Then again MY every day life is strongly tied to metaphysicism and mysticism.

Olli: I see how one might come to such conclusion. Sami is infused with mysticism to the point where his everyday life seems to outsiders as one big ritual. That’s one of his powers leading him to become such great and magickal musician and persona.

Sami: It is called Den döende dandyn (The Dying Dandy in English) and was painted in 1918 by Nils Dardel. We liked the idea that here we see one kind of chamber as well, and it really suits the visual image and layout of the album. It was the only artwork we ever considered to this.

7.Are there any plans to bring the music to the live stage?

Sami: No. This is very definitive studio work. Besides, I myself am slowly retiring from doing gigs altogether. I never liked doing them. I am a studio producer and musician.

Olli: There would be only a few if any occasions where we could fit in with this project so it is easier and more rewarding to leave it to the studio.

8.The new album is going to be released on 'Svart Records', how did you get in contact with this label?

Sami: I have been working with them quite much from the day one. They have released a pile of my  albums.

Olli: Svart re-released my rap group Ronskibiitti’s 2006 album Eipä Kestä and my 2004 “solo” effort Hammaspeikko – Karies Mundi on vinyl in 2017 and released our spin off groups Ronski & Satanic’s – Täältä tullaan kuolema album in 2018. In the meantime I found myself working full time for the label as a producer. That has turned out to be a good thing for Chambers too. I can keep a fairly close eye on the efforts the label is doing for the album and see that the promo and marketing department doesn’t fuck it up too bad.

9.On a worldwide level how has the reaction been to the music by fans of experimental and other underground genres?

Sami: So far, nothing! Let us wait until it is out. But I am not expecting for any miracles. This album is not for everyone. And then again it COULD offer something to everyone.

10.What is going on with some of the other bands or musical projects these days that some of the band members are a part of?

Sami: I am working on the second album of me and legendary Läjä Äijälä, an album with old Finnish sludge band Loinen, a Pussies album, a harsh noise album called Noiseworks, reissues/compilations from The Candles Burning Blue and Spiritus Mortis, and of course new album from Opium Warlords. I have also done vocals to one black metal album that will come out next year. In 2023 I will finish all the above, and then cut my actions down to one to three projects, which include at least more work with Läjä Äijälä and Opium Warlords.

Olli: I released a collaborative album with Tatu Metsätähti aka Mesak called Repullinen skittejä few moons ago. It’s out on a cassette by Cudighi Records from Los Angeles. We are also planning to record a new album with Ronskibiitti this fall. Otherwise the lack of time and energy is keeping me away from creating new music at the moment.

11.Are there any plans for future releases?

Sami: No, but then again I do not close that door completely. It was great fun working with Olli, whom I consider as one of my very few friends.

Olli: I have actually an idea I haven’t discussed with Sami yet. We’ll see if it takes wind...

Sami: I hope that people dare to check our album out even if the single releases might have driven them away. This is so massive work that it can’t be wrapped to couple of singles. It has SO much in it.

Olli: True. Taking one or two songs out of the context might almost do more harm to it.

Posted by OccultBlackMetal at 6:35 PM