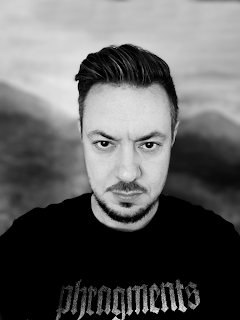 I have been creating the songs for this album during the past three years. It’s been an ongoing process and all four songs are bound by a common theme that I have been exploring during those years. Since music is not my day job, and I am first and foremost a husband and father, I have had less time for music. However, once the muse kicks in, it’s unstoppable.

Musically, “Anthems Of Solitude” is a continuation of the path that I have been exploring on previous albums. The music on the new album is dark ambient with orchestral undertones, field recordings and a bit of analogue synths. I have recorded a bit of vocals this time, too. Where it differs from the last full-length “All Towers Must Fall”, is that the songs are more introspective. This, however is most definitely connected to the theme of the album.

3.This is also your first album in the past 4 years, can you tell us a little bit more about what has been going on during that time frame?

During the past 4 years I have been doing what I always do – just keep composing at a pace that results from two factors: my lack of time and the muse. Sometimes I don’t compose anything for weeks, even months. At other times, I create sketches of two songs in two days. What never happens though is that I would finish a song in a short time. The songs always have to undergo a process of ripening.

4.You have referred to your music as being  "Orchestral Dark Ambient" and "Apocalyptic Electronics'can you tell us a little bit more about this term?

Well, the first definition is more musical – the genre I mostly operate in is dark ambient with orchestral undertones, or an overall orchestral atmosphere, if you wish. Apocalyptic Electronics refers more to the semantics behind my musical work. In my musical worlds, ’m never too far away from an overall apocalyptic feeling.

The artwork was created by my good friend, the talented graphic artist Nenad Branković. I have cooperated with him for more than 10 years and he has also been a live member of Phragments. The cover is pure atmosphere, and stands for the main topic of the album: solitude. The cover is less dark than the ones on my previous albums. It has lot of white colour and that hints a bit to where I have evolved during the period of the last three years. However, I’m not sure you can hear too much light in the music.

6.In a previous interview you described yourself as a pagan, can you tell us a little bit more about how your pagan beliefs have evolved over the years?

I say that I’m a pagan, but in the sense of being opposed to gods and religions. I’m an atheist (used to be a strong antitheist). However the topics of religions have always been of interest to me. And I love studying diverse mythologies from around the world.

7.You also have mentioned having an interest in extreme metal, have you also played this style in past bands and also do you feel your diverse interest in music has made you a better musician over the years?

As a fan and music consumer, extreme metal is actually what I mostly listen to. I have never played in a metal band, but I have been an avid fan since my early teens, even spreading the gospel (haha) during my days as a university lecturer. I love black metal, death metal and doom metal for life. I definitely think my diverse musical tastes (that go far beyond metal) have contributed to where I am now as a composer.

8.You also have an interest in literature, what are you currently reading these days and also do any of the authors you have read also have an influence in your musical concepts?

I have very little time to read fiction nowadays, but if I do read, it is mostly graphic novels from all around the world. I love comics and have really fallen in love with the format of graphic novels. My favourite author has to be Alan Moore.

9.What are some of the best shows that you have played over the years and also how would you describe your stage performance?

Well, I definitely know what my best show was – I have also released it on a second disc of the All Towers Must Fall 2CD. It was on the 4th of July 2014 at the Hradby Samoty V. festival. Such a wonderful event and such a great concert. The festival took place in a renaissance castle and we played in this amazing theatre room. The audience was very responsive, we decided to play in darkness with no lights and the concert was a total blast. During the years I was lucky to have had the chance to play at some really amazing locations – castles, bunkers, great small clubs. My stage performance isn’t anything fancy – I used to play with a video projection, in the last years I play without it.

10.Over the years you also have been a part of a few splits, can you tell us a little bit more about the other musical projects that had participated on the recordings?

Yes, I have participated on splits, compilations and had quite a lot of collaborations. A very good showcase of my collaboration tracks is featured on Fratres – an album that collects collaborations from the previous years. The collaborations feature my friends and brothers in darkness – mostly dark ambient musicians: Atranenia, Mindspawn, Rasalhague, Sock Frontier and Terra Sancta.

11.The new album was released by 'Construct.Destroy.Collective', can you tell us a little bit more about this label and also how would you compare working with them to other labels that you have been a part of in the past?

CDC is my own label. I have run it in the early 2000s, nowadays it usually lays dormant except when I want to release or co-release an album. I have been fortunate to release most of my albums on the fantastic US label Malignant Records. For “Anthems Of Solitude”, however – I decided to go back to the roots and self-release, with Malignant Records handling the distribution of the vinyl version in the US. The reasons are multiple, but mainly that underground labels are struggling – it’s really hard for them to sell physical releases, especially CDs. So, after a talk with Malignant’s label-boss Jason, I decided to release the album myself – after all, the physical version is extremely limited (111 CDs and 111 LPs), so it wouldn’t make much sense to even send it over from Europe to the States.

12.On a worldwide level how has the reaction been to your music by fans of dark ambient?

As I see it, it has always been very positive. And that’s definitely a thing that I enjoy most on creating music – being able to communicate via my compositions with people from all around the world. I have fans in Europe, US, South America, Australia, all around.

13.Where do you see yourself heading into as a musician during the future?

No great ideas for the future. I let it flow. However, I suppose my next album will feature more live orchestral instruments – but who knows? I’d like to play some concerts again, but the current situation in the world doesn’t permit it. We’ll see what happens.

14.What are your currently listening to nowadays?

Last year it has been mostly black metal for me – I’m really glad to have discovered Aosoth’s discography. I also loved Svartsyn’s latest album, and the final album of Soli Diaboli Gloria. But my favorite scene within black metal is by far the Icelandic scene, with giants like Svartidaudi, Misthyrming, or Sinmara. This year I also came back to listening to other dark ambient artists - I have a stable 30-40 albums that I listen to - mostly titles released on Malignant Records, Cyclic Law and of course the legendary Cold Meat Industry.

15.Before we wrap up this interview, do you have any final words or thoughts?

I want to thank you for the interview and if anyone would like to hear some apocalyptic electronics, check out my Bandcamp and submerge in the darkness. 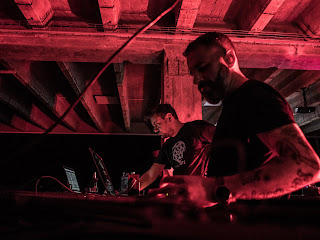