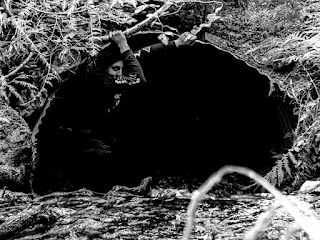 1.Can you give us an update on what has been going on with the musical project since the recording of the new album?

I finished the tracking of Rusted Lock last spring when everything went into lockdown.  During the last half of that process, I had begun working on a collaborative project entitled RatPriest with my old friend and ex-bandmate, Dave Fogg.  There’s a lot of overlap from Scard.  But a more uniform vitriol moves it along.  Having Dave’s input and ideas was a really rewarding and fun collaboration.  It’s nice to have someone to experiment with and detach myself from certain methods I would normally rely on.  Dave is an incredible visual artist as well, and created all of the RatPriest album art.  This will be released on cassette by Fog Palace in early 2021.

The pandemic also gave me and another friend, Pete Jay, the opportunity to finally play together.  I knew of Pete as the drummer from one of my all-time favorite bands in Seattle, Wormwood.  We met DJ’ing a weekly metal night together, and then eventually I saw a performance of his solo project, bZZRd.  We had always talked about collaborating   But other band commitments got in the way.  At this point our album is almost complete.  However, it’s still nameless, and we’re unsure of how it’ll be released.

2.You have a new album coming out in November, musically how does it differ from the stuff you have released in the past?

In the past, I would almost always write and record these monolithic pieces that all flowed in a formulaic way.  Often I would make mistakes or not do something as intended.  I would just say “fuck it, it’s rock and roll” and chalk it up as a byproduct of that or improvisation.  This time I set out to write individual “songs” and execute the ideas more effectively.  I spent a lot of time in my garage studio recording several takes, experimenting with mic placements, adding layers with different effects, and re-amping a lot of stuff through a Model T and JCM 800.

There are a couple songs on the album that might be unexpected.  They have the potential to sound weird or out of place, but I think it’s cool.

3.This is also your first album with this project in 8 years, can you tell us a little bit more about what has been going on during that time frame?

Musically, I was playing live with Winter in the Blood and L’Acephale sporadically.  Personally, I was consumed by my job and some less than desirable activities.  I grew disgusted with feeling creatively lazy and empty, so I took action.  Since then it has been a really productive period of self-transformation.  Between the solo album, two collaborations and writing a new album with Winter in the Blood, I can easily say that it has been the most productive and cathartic period as an artist.

4.You also have experience playing black metal with your other projects and with this project you go for more of a dark ambient and death industrial style, how would you compare your solo stuff to your other bands?

There are a lot of overlapping features, but the biggest difference is that the metal bands have guitar riffs, more structured songs, and a drum “kit”.  I probably put the most energy into the “guitar bands”, since it’s my most proficient instrument and it feels very natural to create with.  I purposely try to keep guitar away from Scard for several reasons.

5.What is the meaning and inspiration behind the name 'Scard'?

Back when I started this, almost 20 years ago, I was using the name in street-art operations.  It was born out of a fascination with (unintentional) scars.  I thought of them as a physical representation of experience points.  I have quite a few...mostly from skateboarding, sports, and drinking.  Thankfully, I retired myself from skateboarding in 2019 after breaking my finger.

The name is nothing profound.  But I’ve used it for so long now, and I like it, aesthetically speaking.

6.Can you tell us a little bit more about the artwork that is presented on the album cover?

I took a close up photo of something disgusting and abstract, then manipulated the levels a bit.  Looking into it is entrancing to me.  To me it represents an impenetrable gateway, locked by obscurity.

7.With this project you record everything by yourself but also have experience working with full bands, how would you compare the 2?

Firstly, I don’t do the engineering when we go into the studio as a band.  That would be a huge pain and I’m not knowledgeable enough with certain things like drum kits.  Working with an external studio/engineer is a way more structured and defined experience.  Recording myself allows a lot of flexibility with time and ideas.  I have short-term goals in mind when working solo, but I can go in and out of the studio as I please.

The band dynamic is just as important to me as working independently.  They both have positives that I try to exploit to the fullest.

8.What are some of the best shows that you have done with this project and also how would you describe your stage performance?

Playing through the Terminal and Katabatik PAs in Oakland was a highlight.  In the past I’d mostly perform without light, with black/white projections produced by my friend/bandmate, Garrett Price.  The last show I played in November of 2018 had a “projection banner” of my logo, that was illustrated by Dave Fogg.

9.On a worldwide level how has the reaction been to your music by fans of dark ambient and death industrial?

I don’t have an answer for that yet.

10.Where do you see yourself heading as a musician during the future?

It would be nice to play shows again someday.  Until then I’ll just keep acquiring more gear and recording out in my cave.

In the beginning I found a lot of inspiration from local folks like Gruntsplatter, Sleeping with the Earth, Okha, Daniel Menche, Nothing, Cathartech, and Bacillus.  Atrax Morgue, Deathpile, and Prurient too.  Some recent acquisitions that I’m really into are:  Black Curse - Endless Wound, Primitive Knot - Brutalism, and The Sublime by YERÛŠELEM.

Thank you for your time and interest.  I’d also like to thank Joy and everyone with Scry Recordings that played a part in the release.  Fester and Plotkin did outstanding work with the mix and mastering, respectively.  If you’d like to follow me, my site is located at hellscum.org.